This is the 2nd post of a series of blogpost on RWC2016. Find the notes from day 1 here.

disclaimer: I realize that I am writing notes about talks from people who are currently surrounding me. I don't want to alienate anyone but I also want to write what I thought about the talks, so please don't feel offended and feel free to buy me a beer if you don't like what I'm writing.

And here's another day of RWC! This one was a particularly long one, with a morning full of blockchain talks that I avoided and an afternoon of extremely good talks, followed by a suicidal TLS marathon. 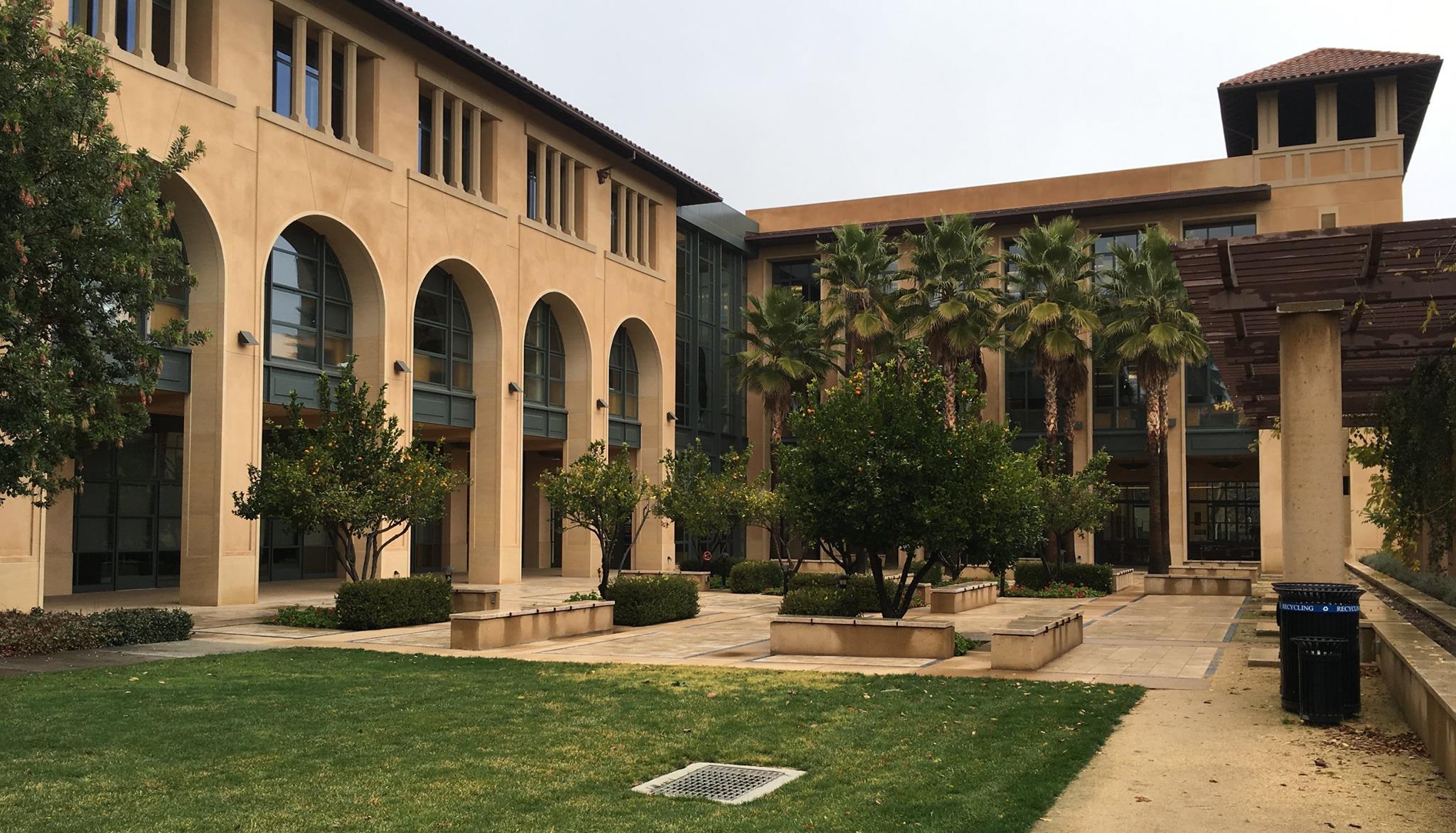 "With all the current crypto talks out there you get the idea that crypto has problems. crypto has massive usability problems, has performance problems, has pitfalls for implementers, has crazy complexity in implementation, stupid standards, millions of lines of unauditable code, and then all of these problems are combined into a grand unified clusterfuck called Transport Layer Security.

For such a complex protocol I was expecting the RWC speakers to make some effort. But that first talk was not clear (as were the other tls talks), slides were tiny, the speaker spoke too fast for my non-native ears, etc... Also, nothing you can't learn if you already read this blogpost.

tl;dw: how to build smart contracts using the blockchain

Dapps are based on a token-economy utilizing a block chain to incentivize development and adoption.

if you're really interested, they have a tech report here (pdf)

As for me, this tweet sums up my interest in the subject.

So instead of playing games on my mac (see bellow (who plays games on a mac anyway?)). I took off to visit the Stanford campus and sit in one of their beautiful library 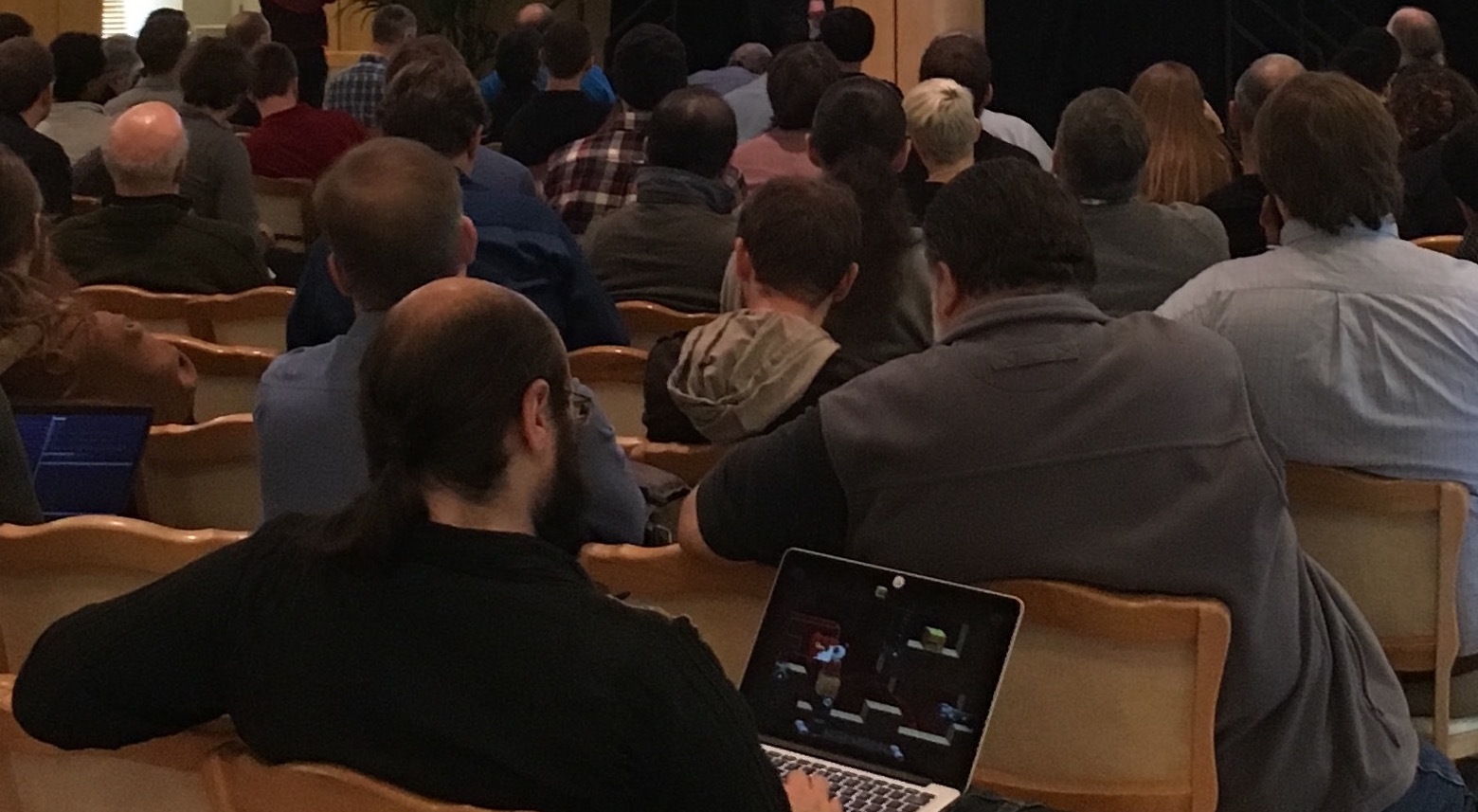 I'm back after successfuly avoiding the blockchain morning. Lightning talks are mini talks of 1 to 3 minutes where slides are forbidden. Most were just people hiring or saying random stuff. Not much to see here but a good way to get into the talking thing it seems.

In the middle of them was Tancrede Lepoint asking for comments on his recent Million Dollar Curve paper. Some people quickly commented without really understanding what it was.

(Sorry Tanja :D). Overall the idea of the paper is how to generate a safe curve that the public can trust. They use the Blum Blum Shub PRNG to generate the parameters of the curve, iterating the process until it completes a list of checks (taken from SafeCurves), and seeding with several drawings from lotteries around the world in a particular timeframe (I think they use a commitment for the time frame) so that people can see that these numbers were not chosen in a certain ways (and would thus be NUMS).

14:00 - An Update on the Backdoor in Juniper's ScreenOS

Slides are here. The talk was entertaining and really well communicated. But there was nothing majorly new that you can't already read in my blogpost here. 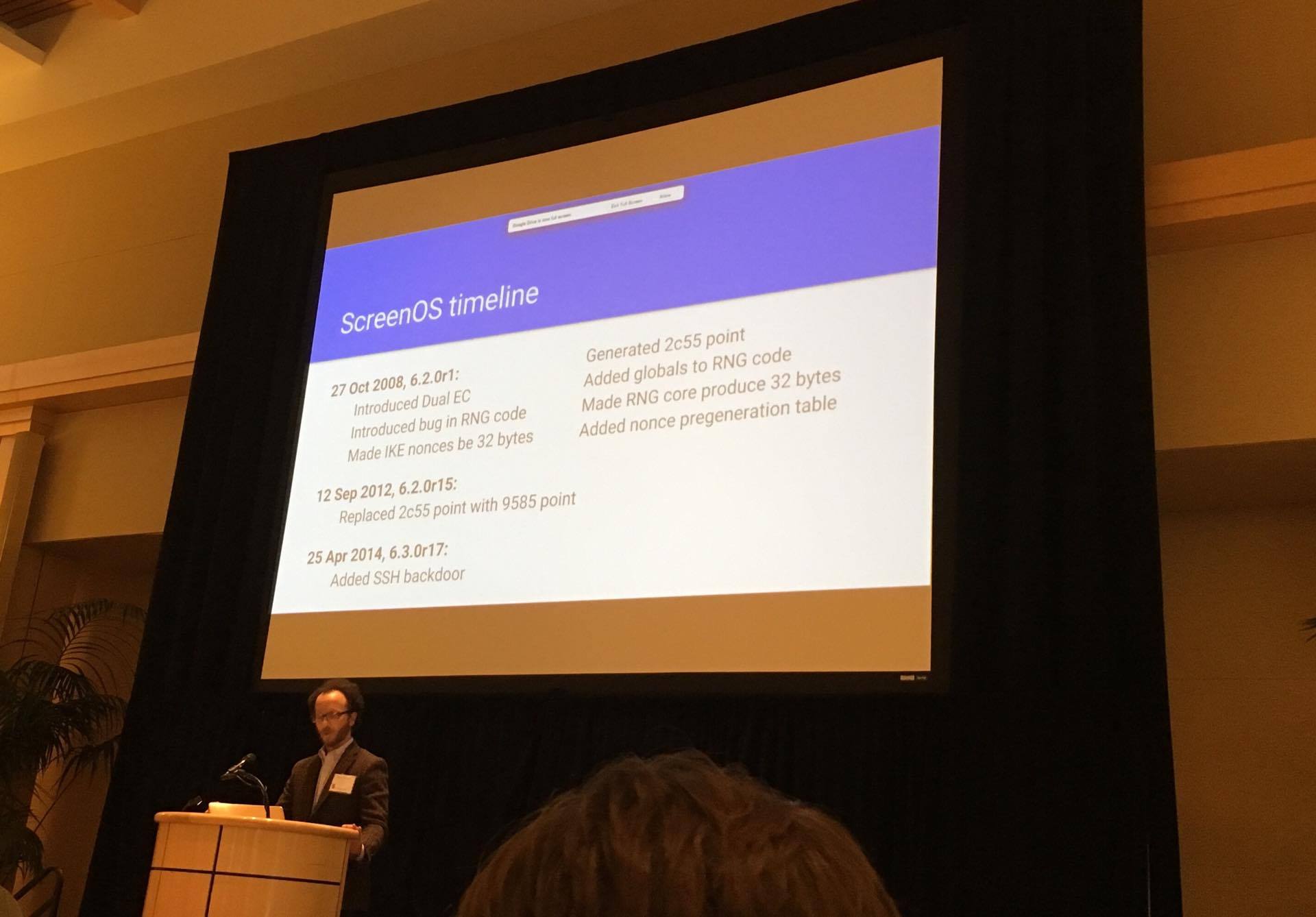 A really good question from Tom Ritter: "how many bytes do you need to do the attack". Answer: truncated output of Dual EC is 30 bytes (instead of 32), so you need to bruteforce the 2 bytes. To narrow the search space, 2 bytes from the next output is practical and enough. So ideally 30 bytes and 2 bytes from a following output allows for easy use of the Dual EC backdoor.

tl;dw: use a external PRF 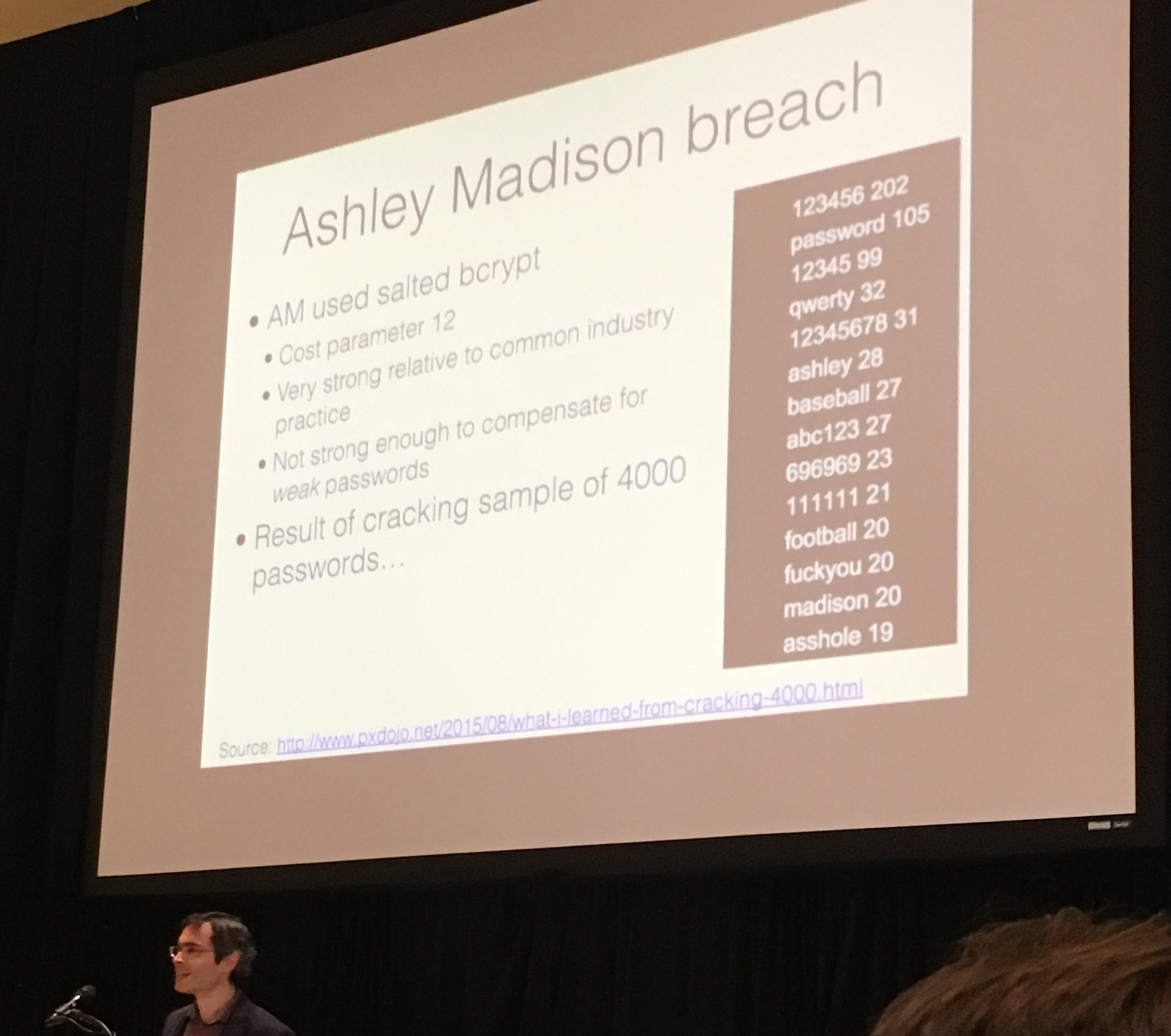 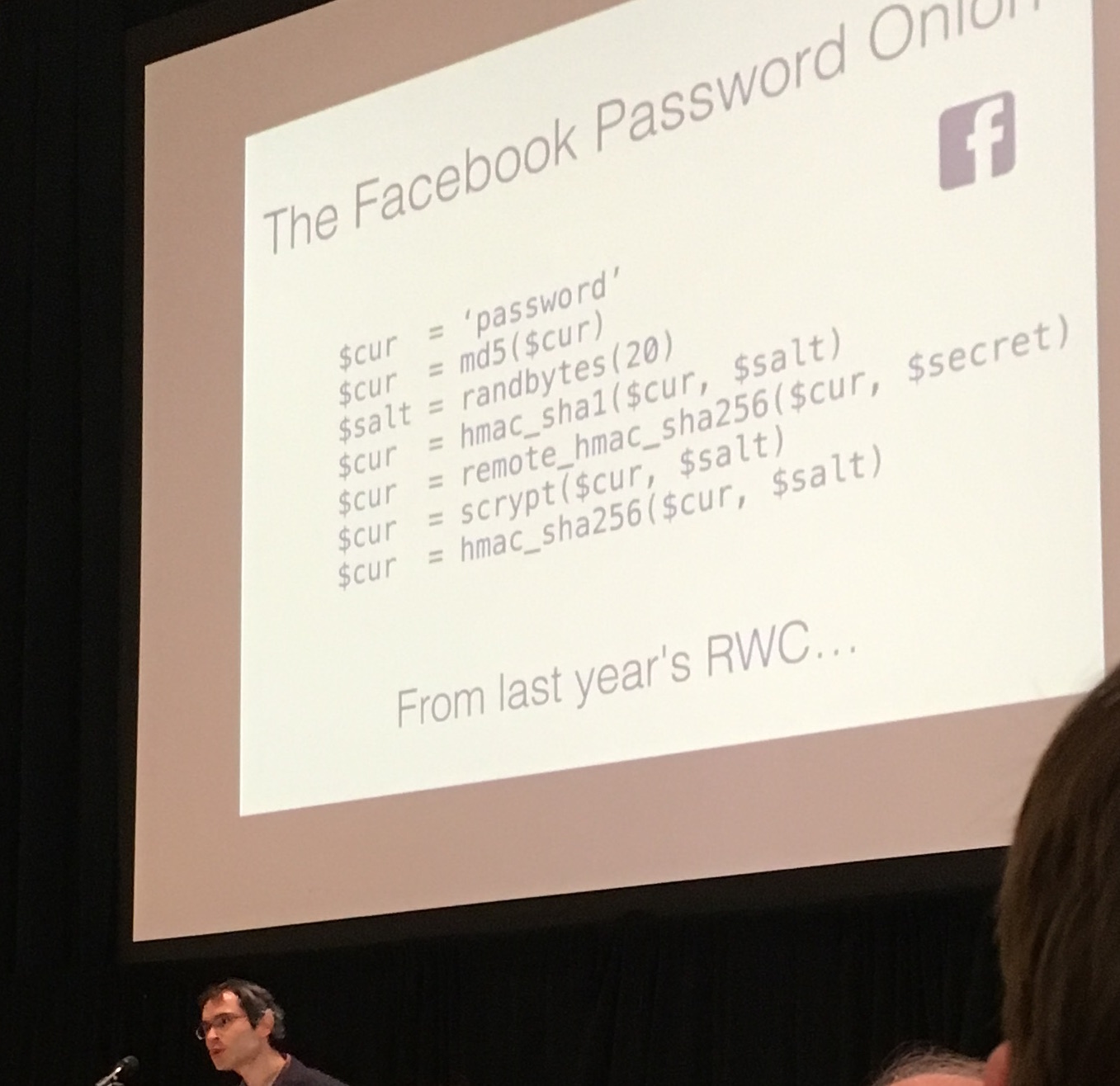 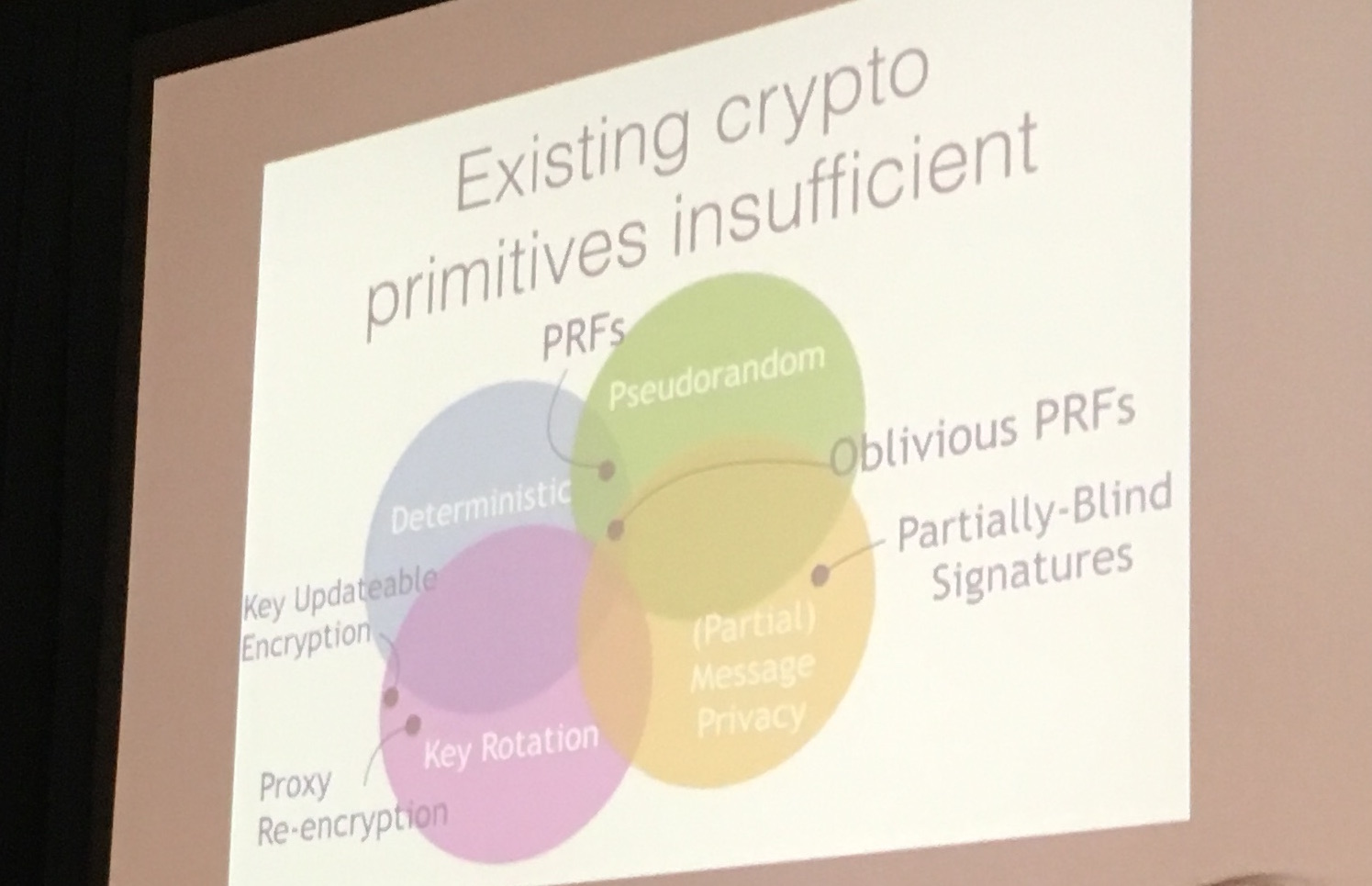 Question from Dmitry Khovratovich: Makwa does something like this, exactly like this (outch!). Answer: "I'm not familiar with that" 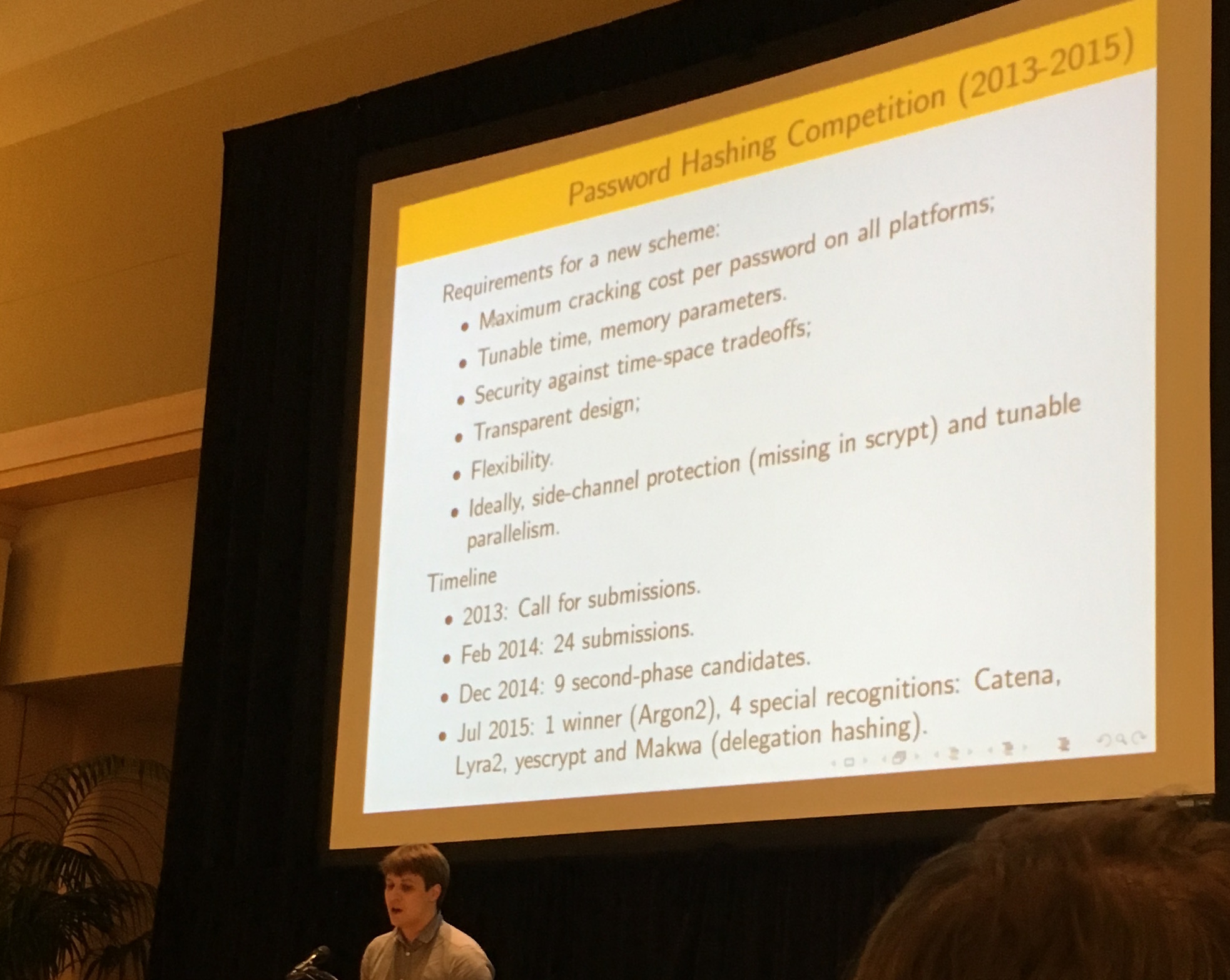 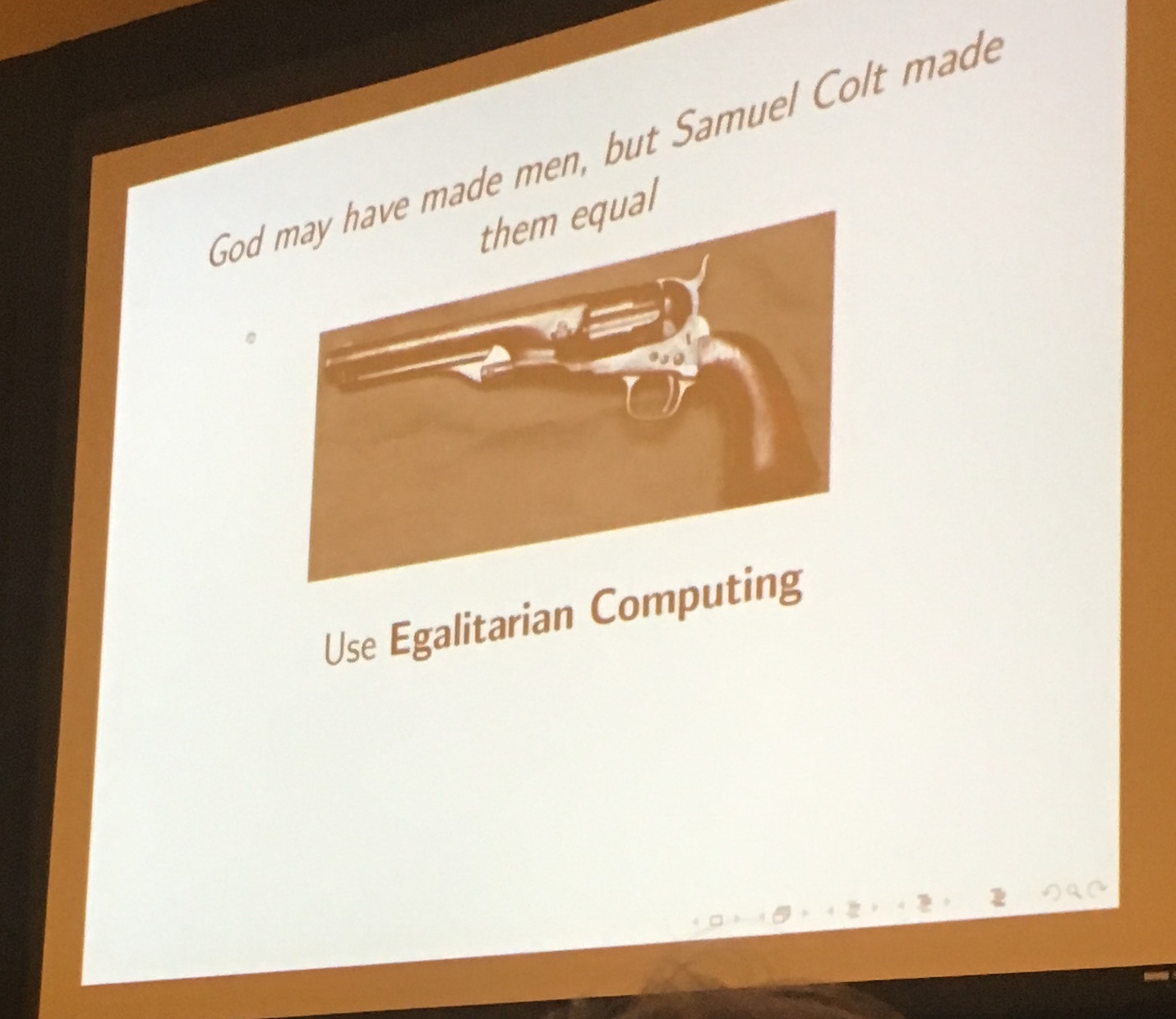 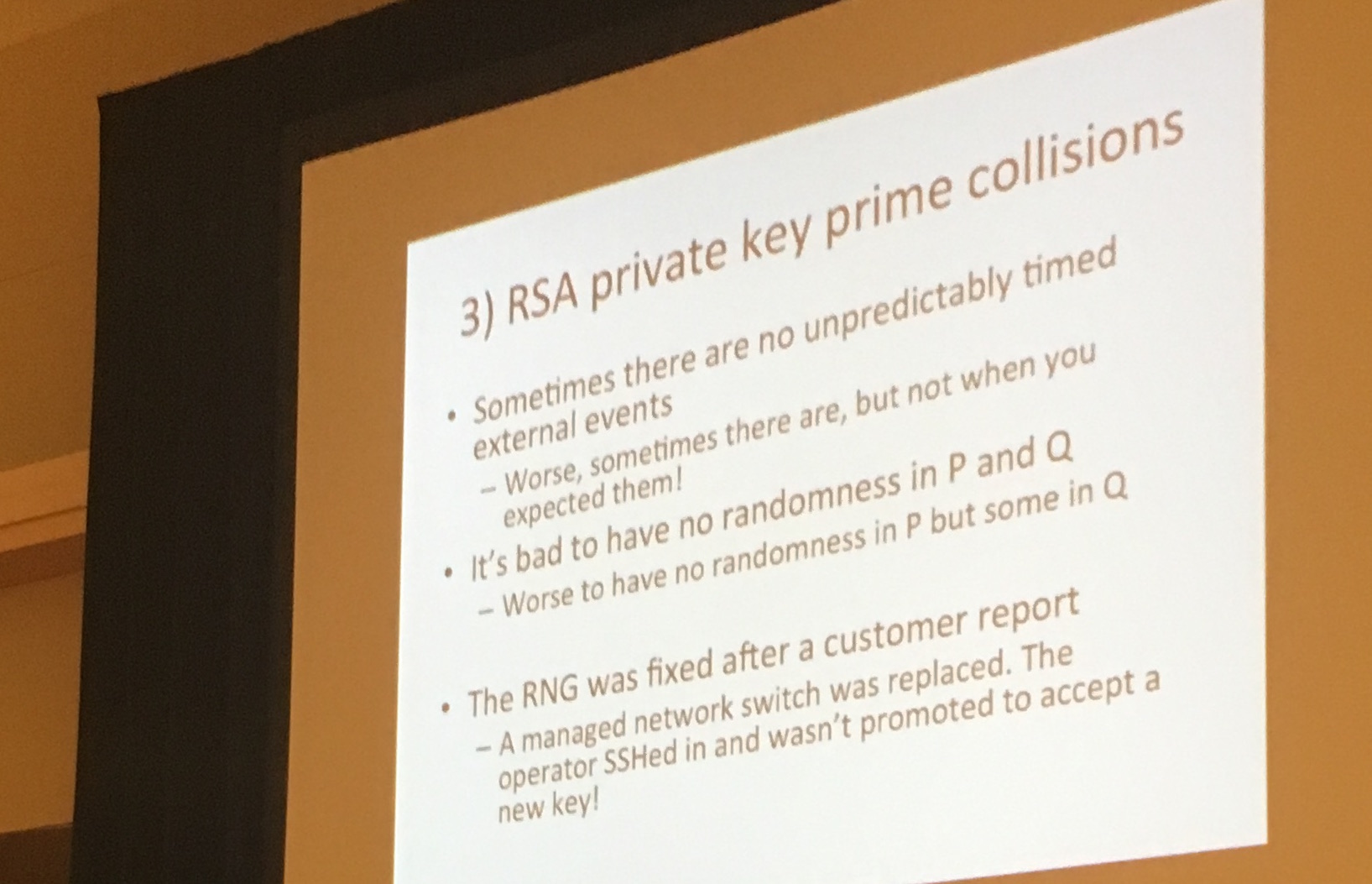 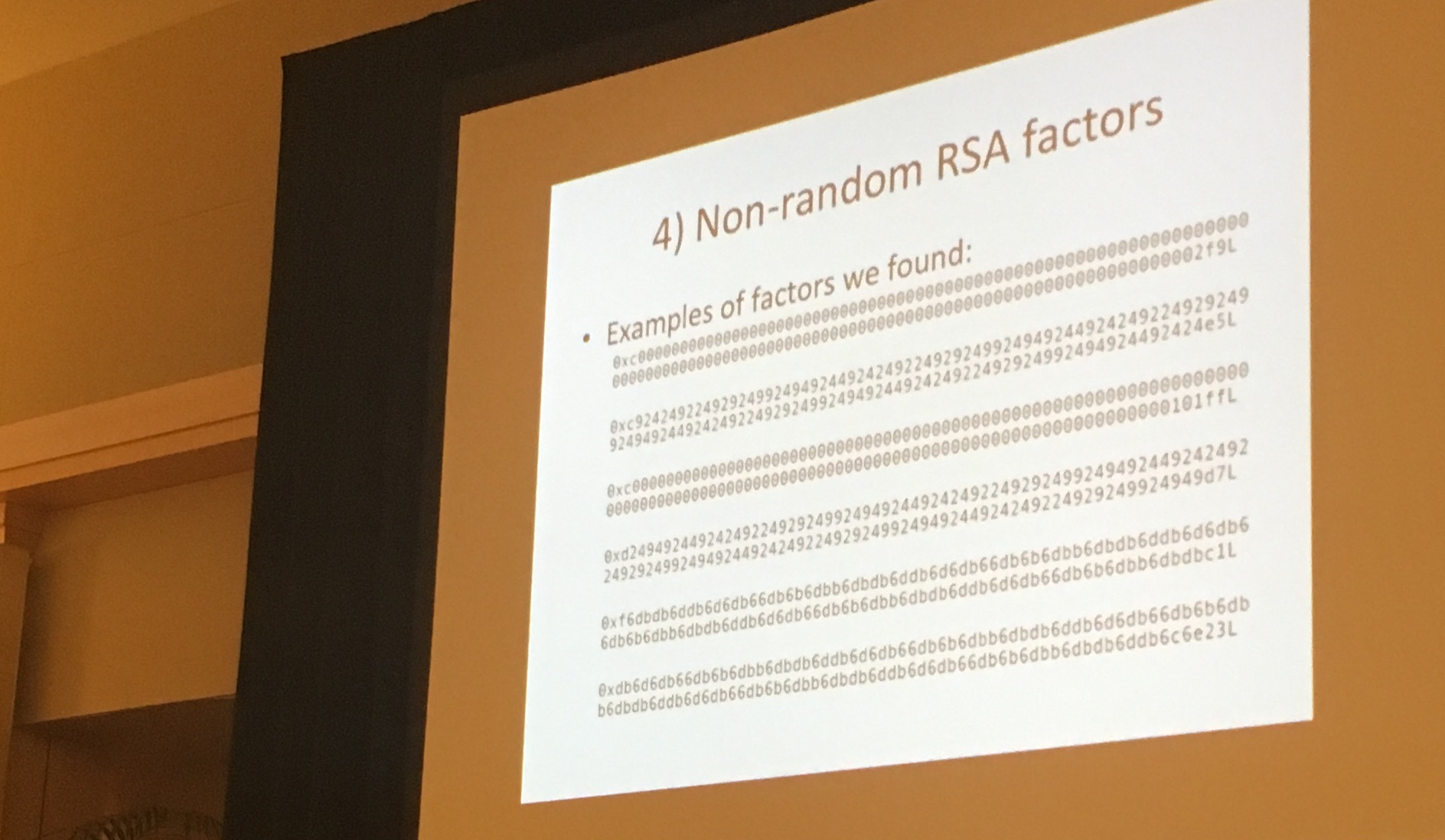 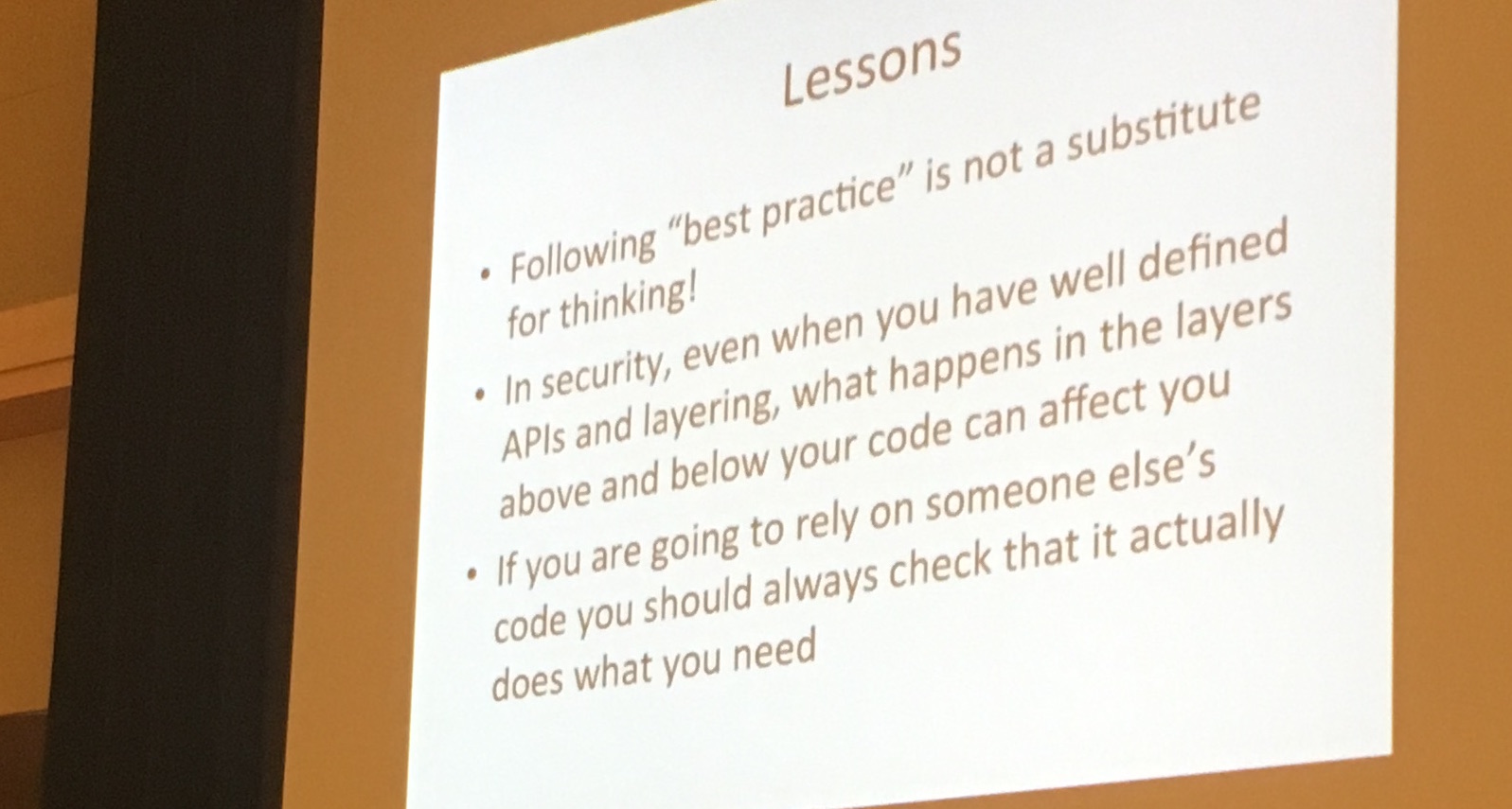 from the audience, someone from Netscape speaks out "yup we forget that things have to be random as well" (cf predictable Netscape seed)

Timeline of the https deployment: Server Name Indication (SNI) is an extension to the TLS computer networking protocol[1] by which a client indicates which hostname it is attempting to connect to at the start of the handshaking process. This allows a server to present multiple certificates on the same IP address and TCP port number and hence allows multiple secure (HTTPS) websites (or any other Service over TLS) to be served off the same IP address without requiring all those sites to use the same certificate Didn't understand much, but I know that all the answers are in this paper. So stay tuned for a blogpost on the subject, or just read the freaking paper! tl;dw: how does OPTLS works

The OPTLS design provides the basis for the handshake modes specified in the current TLS 1.3 draft including 0-RTT, 1-RTT variants, and PSK modes

I have to admit I was way too tired at that point to follow anything. Everything looked like David Chaum's presentation. So we'll skip the last talk in this blogpost.