CHES started with a Tutorial on Smartcards, their certifications and their vulnerabilities. The morning was mostly a talk by Victor Lomné (ANSSI) about the Common Criteria for smartcards (CC), a framework through which smartcards vendors can make claims of security and labs can get them certified.

These certifications have different levels of security, from trivially testing the functionalities, to formally verifying them with the use of tools like COQ 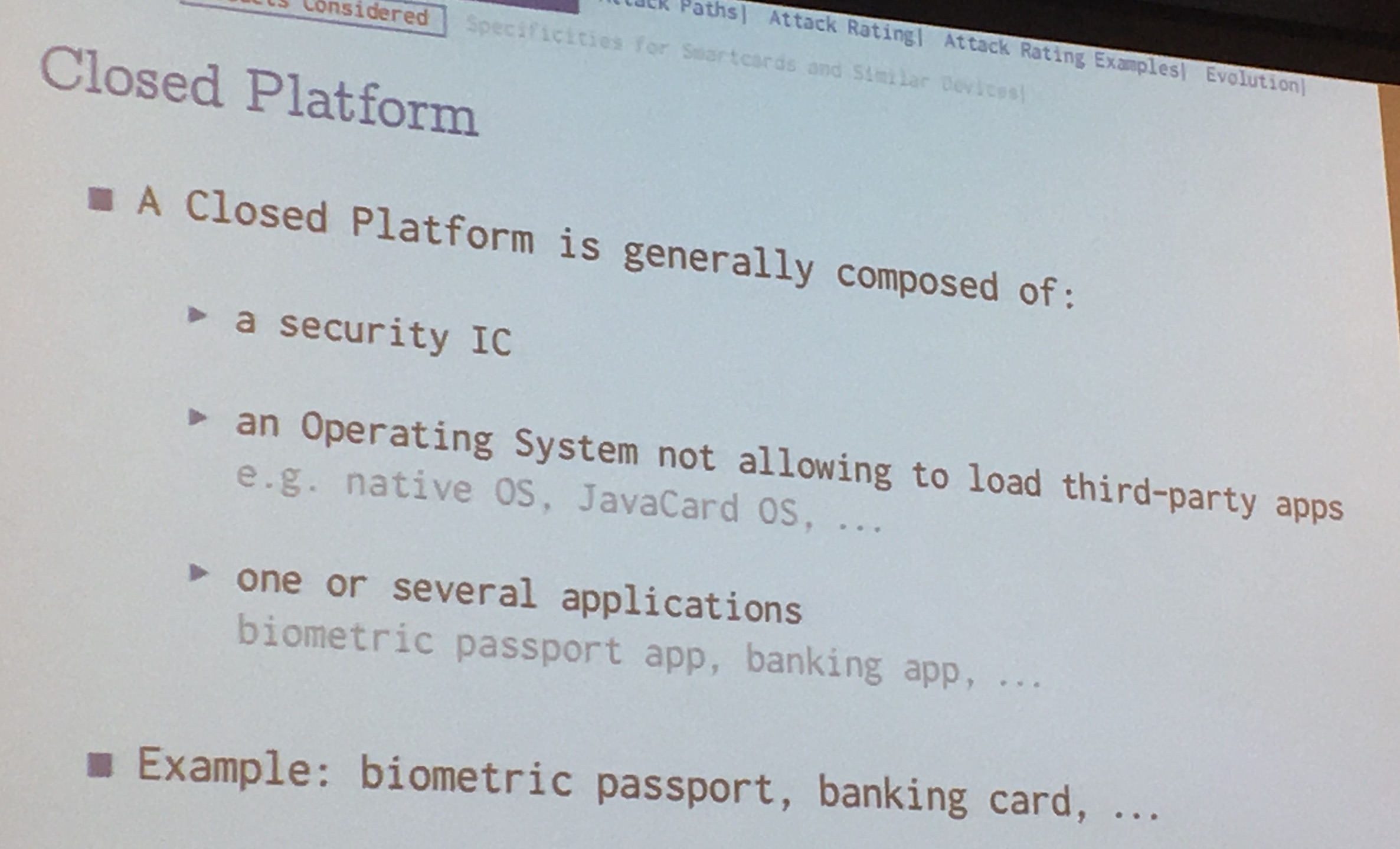 What Gemalto, Obertur, and others... do is to buy an new security IC from a manufacturer and develop a semi-open platform with an OS (often a Javacard OS) then get that thing certified. After that their client (banks?) buys it, develop applications on it via SDKs and re-apply for a certification after that.

From what I got from both the whitebox and this workshop is that we actually don't know how to fully protect against side-channels attack and so we need to protect in hardware via anti-tampering and anti-observing measures.

To check the security of these physical thingies you need a lab with really efficient microscopes (atomic-force microscopy (AFM) or scanning electron microscope (SEM)), because chips are crazy smalls nowadays! Chemical tools to unsolder components, ... 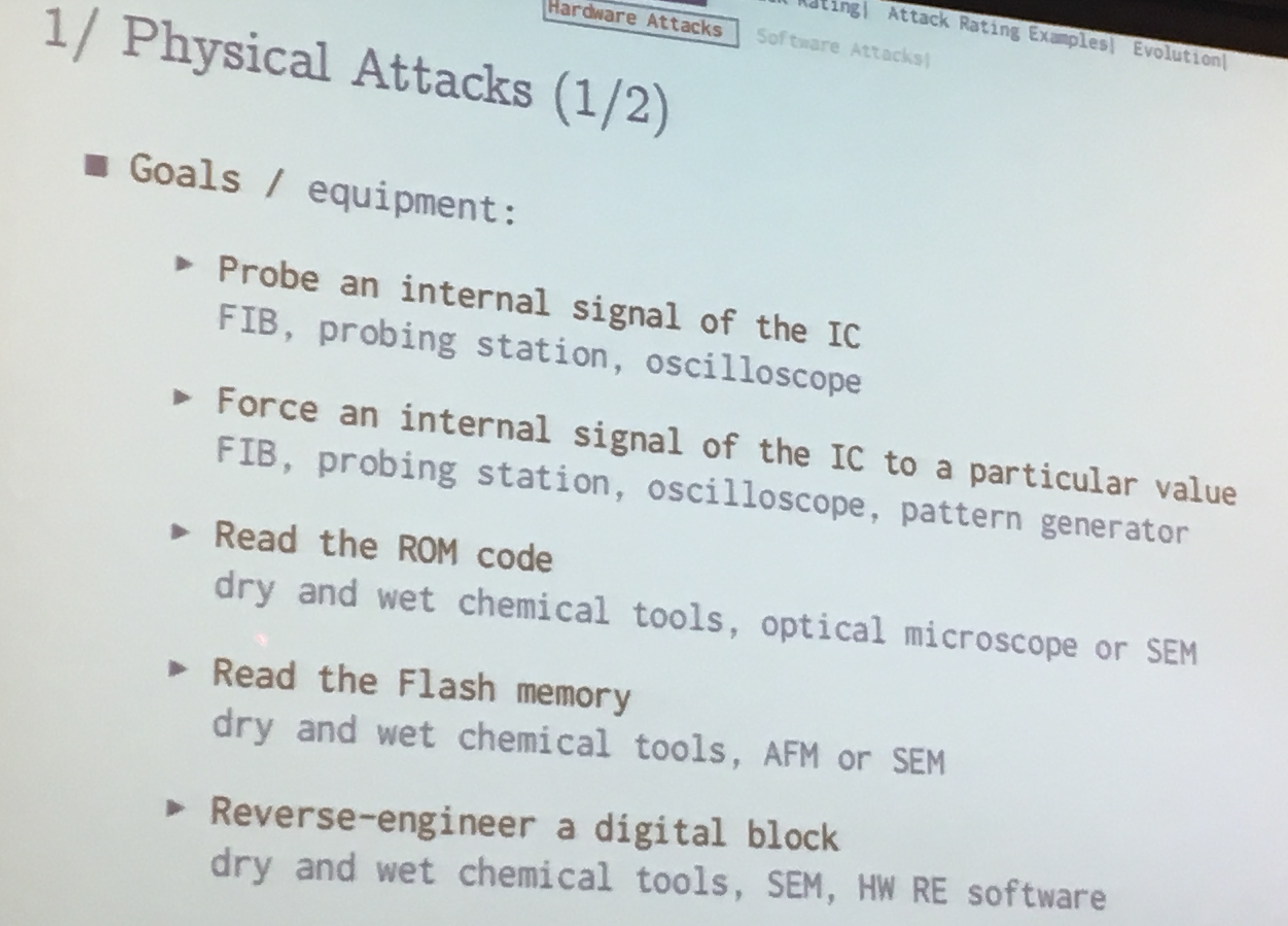 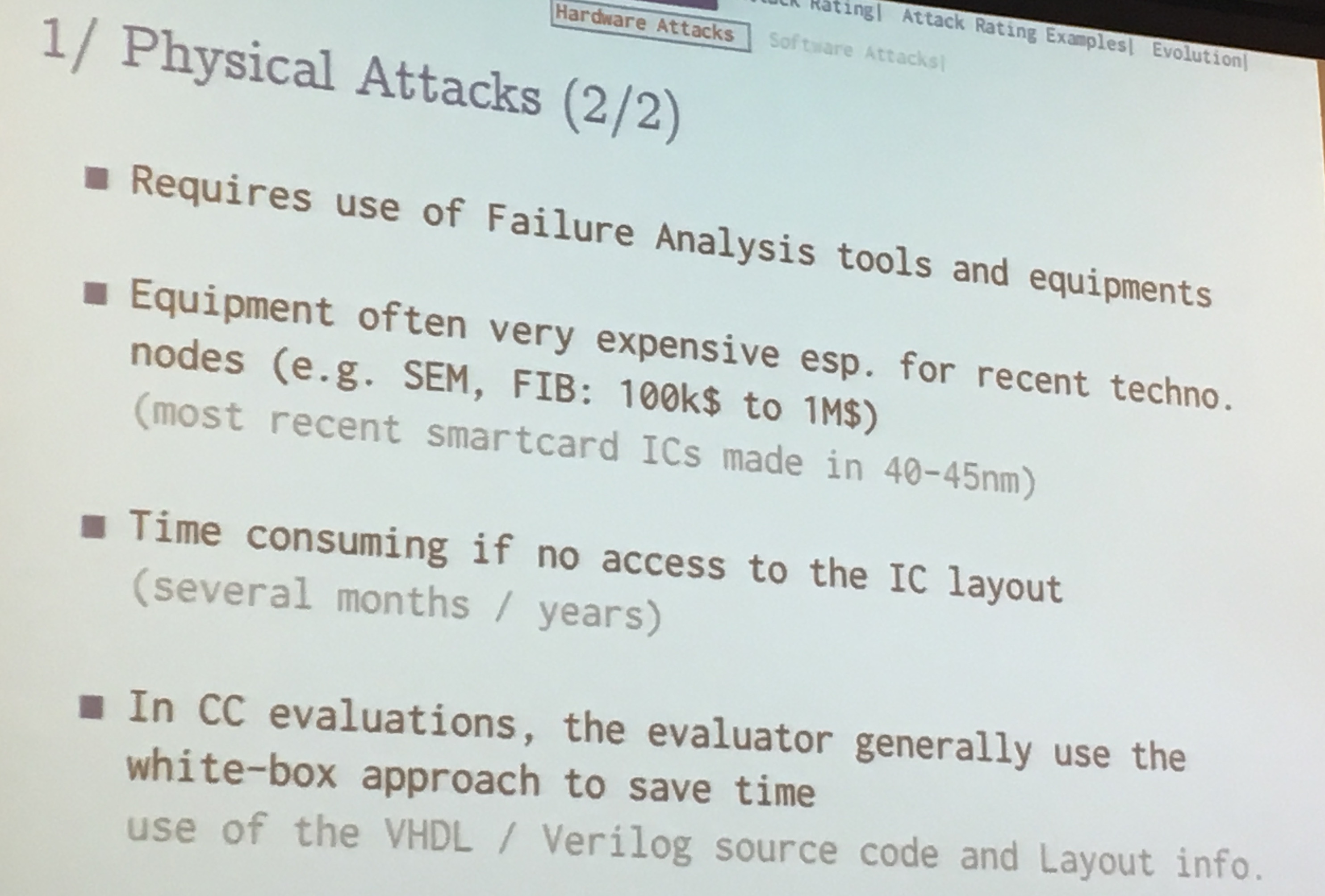 All these tools cost a huge amount. Maintenance of the equipment is also another huge cost. You don't open a lab like that :)

Here are different goals of your attack, first you need to bypass these detectors, like canaries in "protected" binaries: 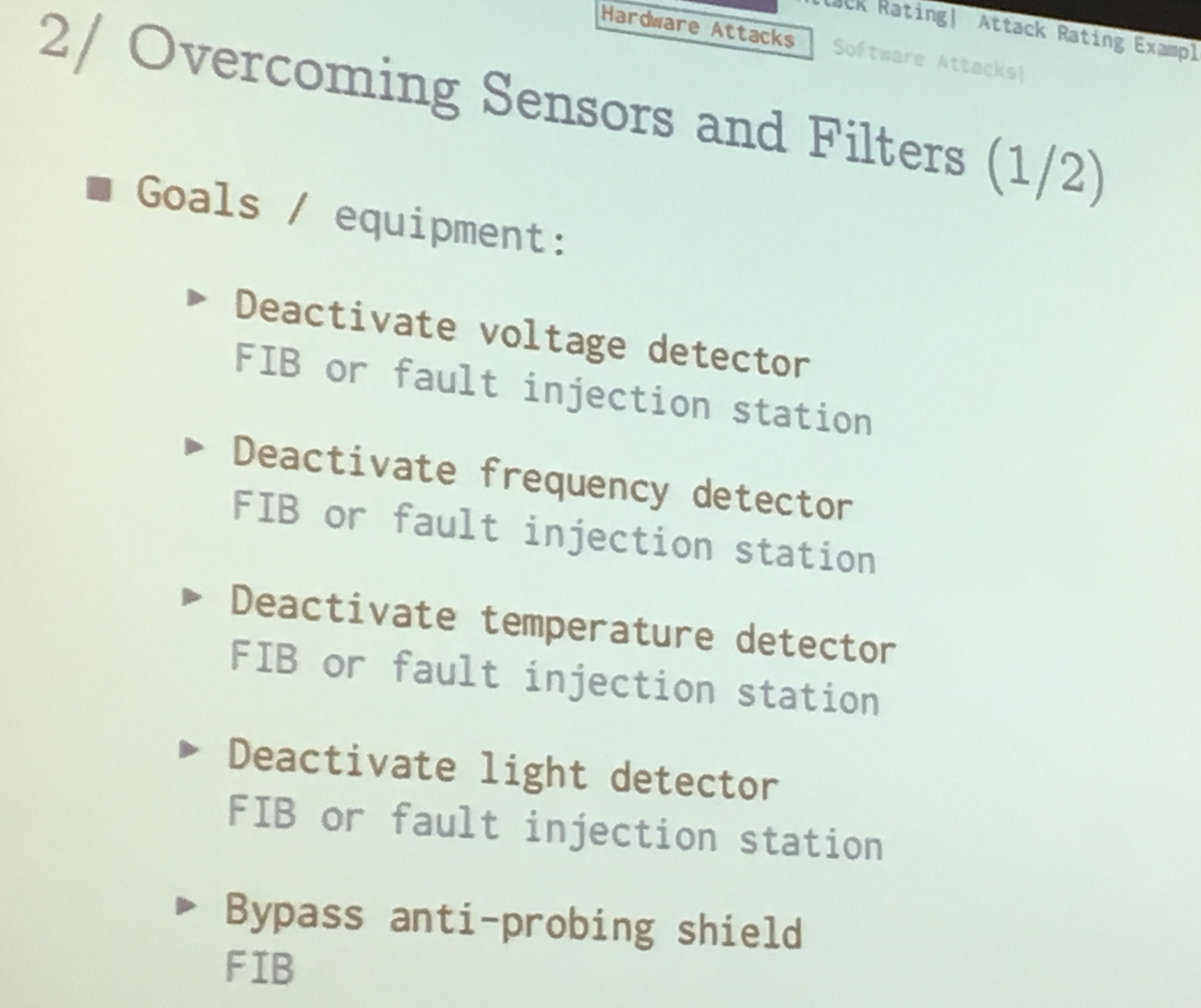 The labs do all these kind of attacks for every chips. 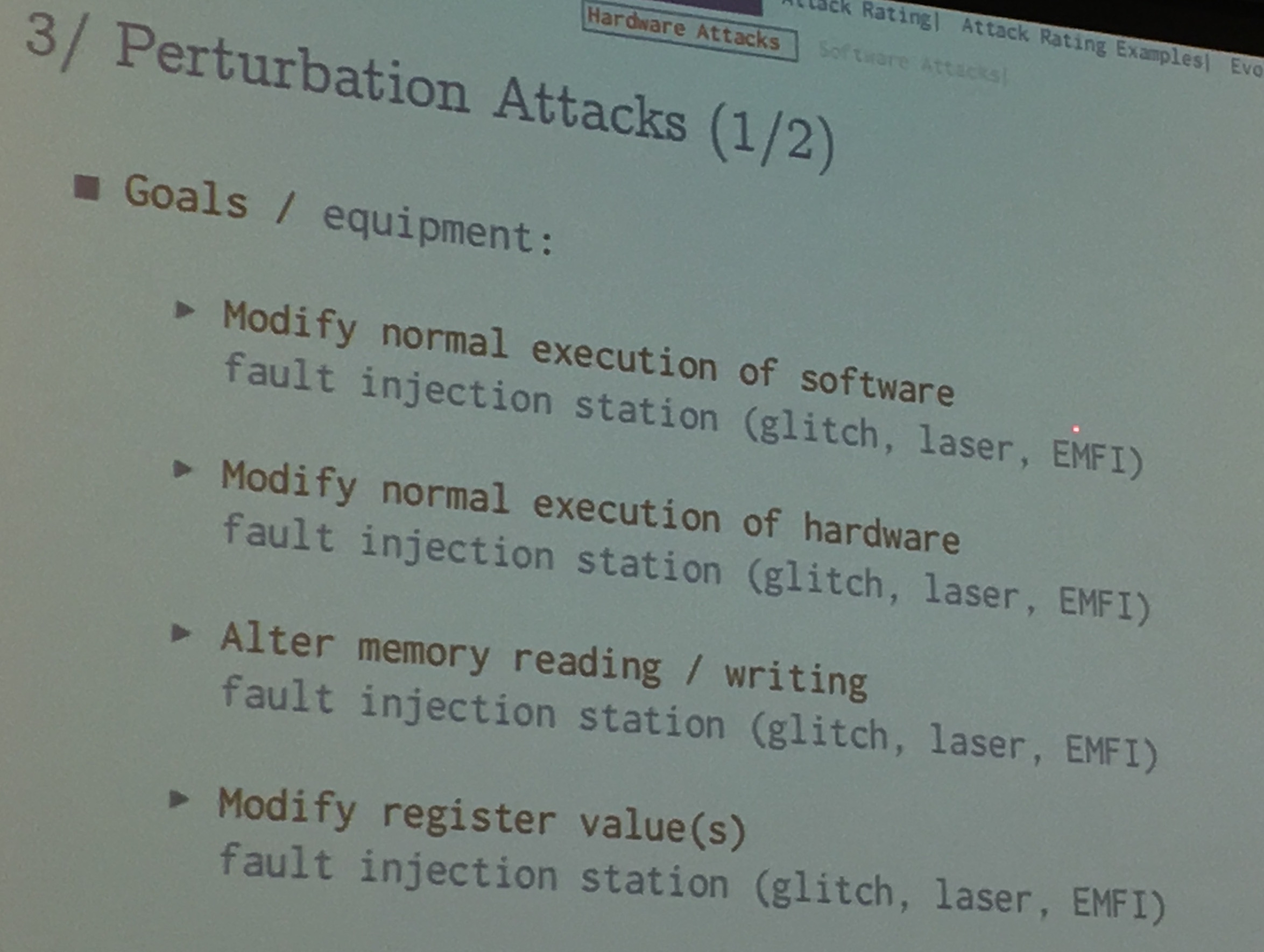 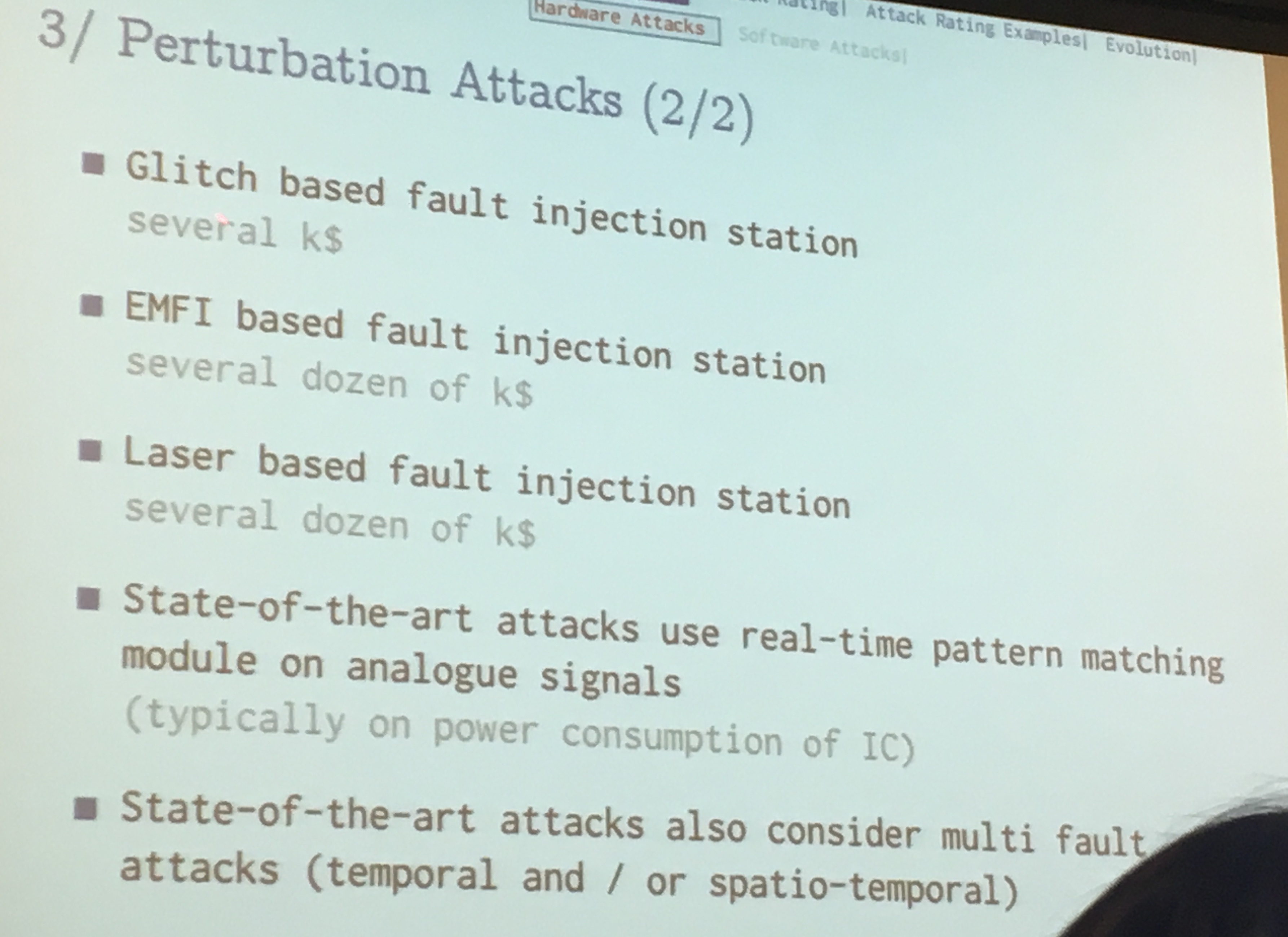 For lasers attack, they look at the power consumption, when they detect certain pattern it triggers the laser. These kind of tools are not really known by the academic community, but in the certification world it happens all the time.

In whitebox type evaluation (needed since it helps saving a lot of time), the evaluator knows the key already so that he can correctly debug his faults attacks, and verify as well the result of an attack. 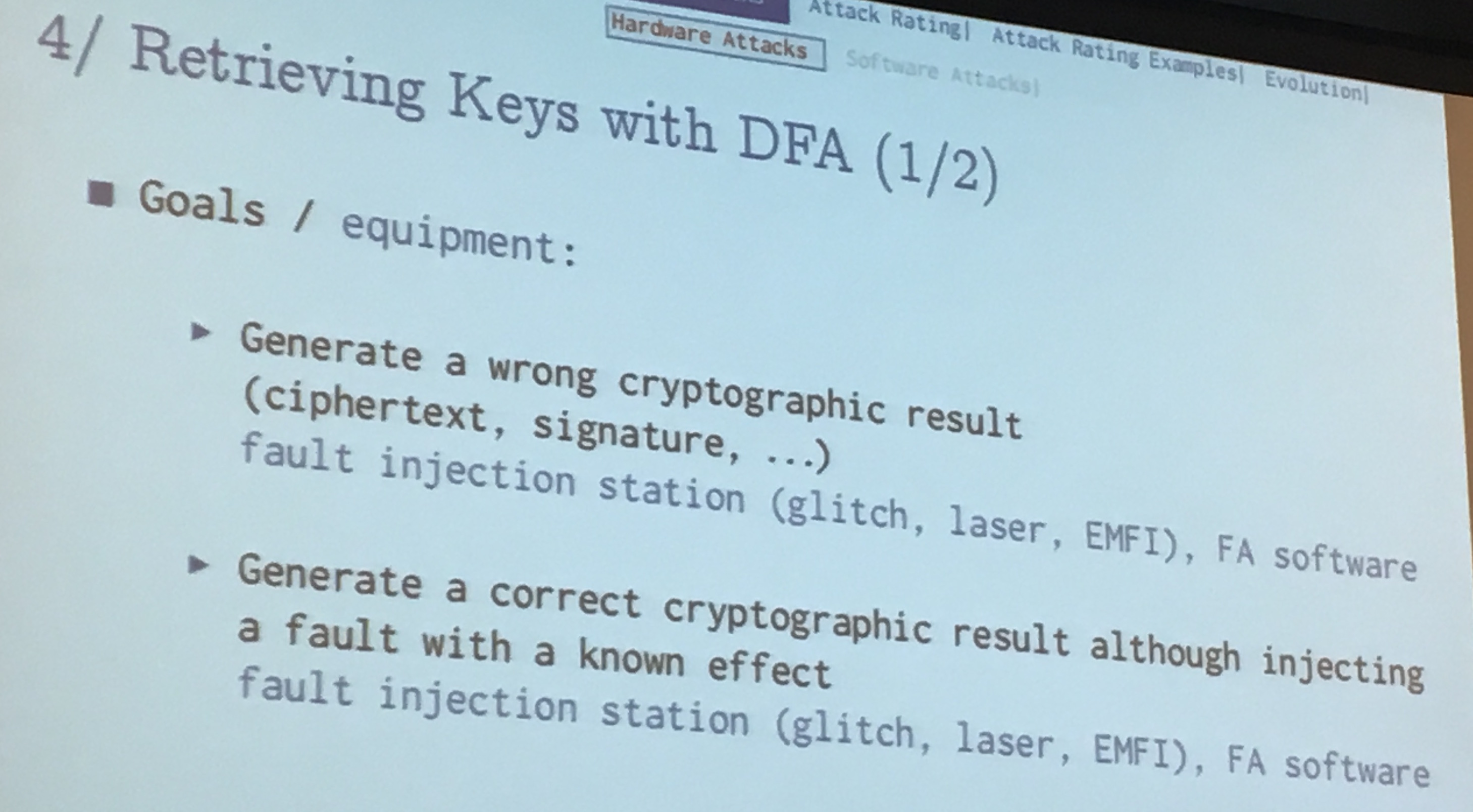 Side channel attacks use power and electromagnetic stations. Basic techniques were they record traces, align them, apply known attacks...

Like other hardware thingies, they have "test features" (think JTAG). You can try to re-enter these test mode with faults and focused ion beams (FIB) and then you can dump the non-volatile memory (NVM)

Attacks on RNG exist as well. Basically when you can do fault attacks you can have fun =)

Attacks on the protocols as well...

the language used (javacard) also introduce new vulnerabilities. You can try to inject applets in the system to recover secrets, via a smartcard reader, you can try to escape from javacard via type confusion and other common vulnerabilities in javacard. It gets crazier than that by mixing in fault attacks modifying the purpose of current applets.

Another thing is that they need a large number of devices because fault attacks, especially lasers and FIBs, will often break the device. 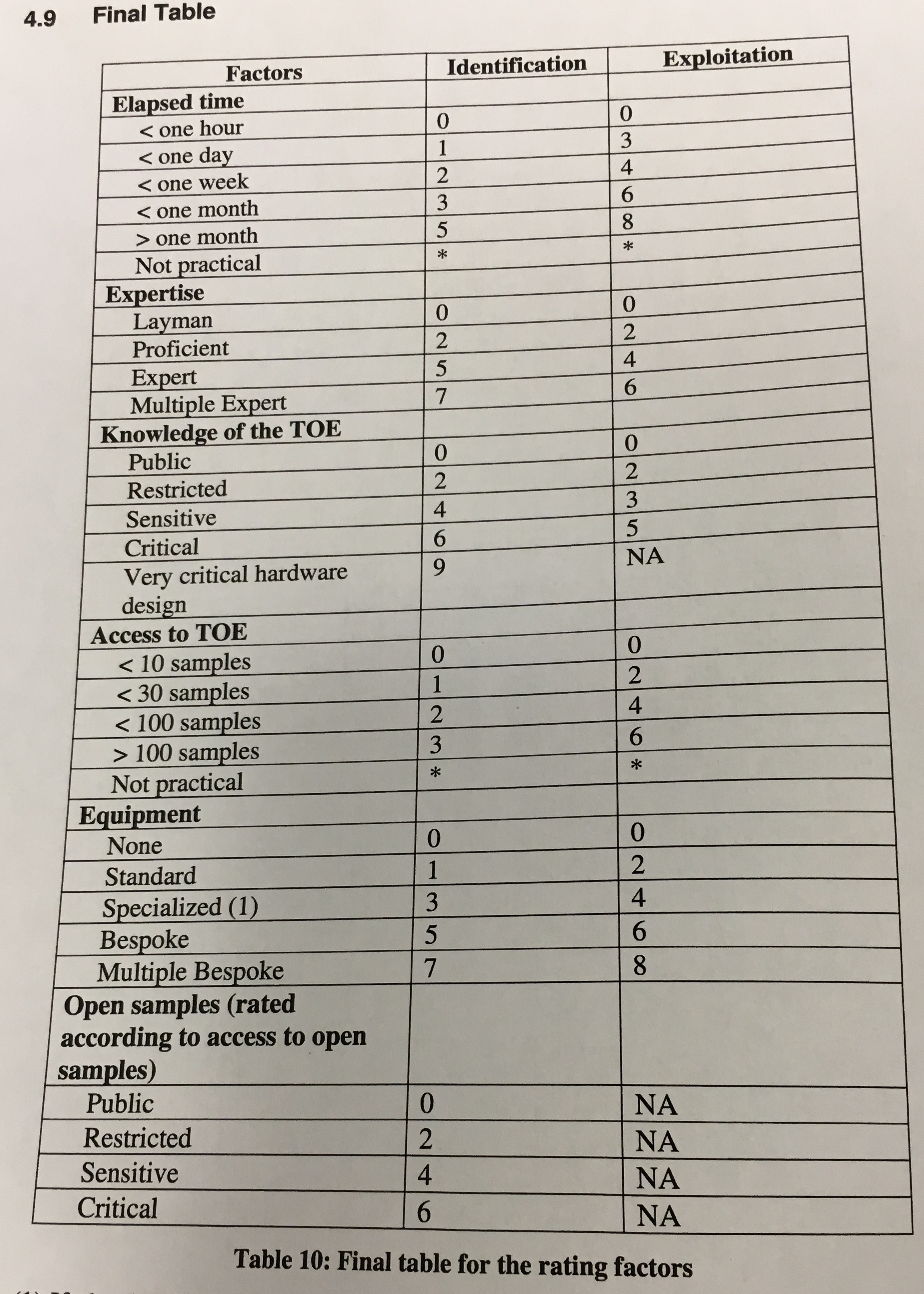 He also told us to watch this video:

You can read part 2 here