Everyone was at CCC before new years eve, and everyone keeps talking about how great it was and how good a time they had... :(

But now is RWC2016 (nothing to do with the real world cup)! and it's awesome! and it's so far the best crypto convention I've attended!

Global overview and dumb summary of the day (followed by notes of the talks, so just skip this list): 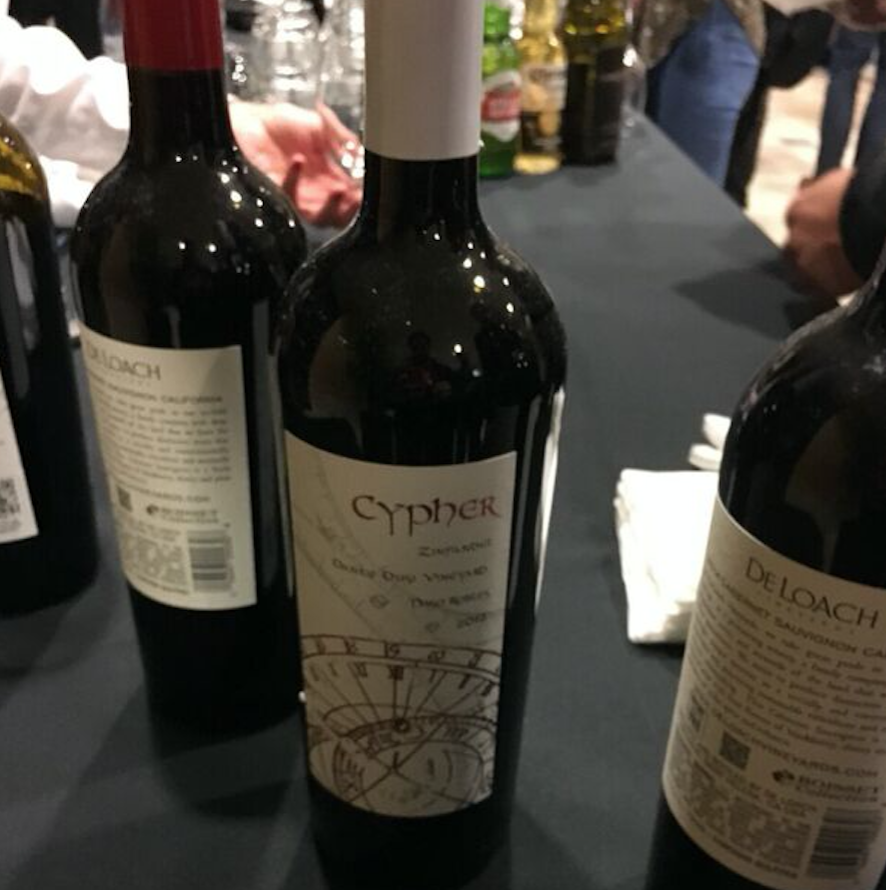 Two human beings verbally compare the Short Authentication String, drawing the human brain directly into the protocol. And this is a Good Thing.

ZRTP seems to be a normal DH key exchange, except that you have to compare SAS (a hash) of the public keys aloud on the phone.

There is also the concept of key continuity, where you keep some value that will be used in the following DH key exchange.

If the MiTM is not present in the first call, he is locked out of subsequent calls

Makes me think, why the ratchet in Axolotl? Why the need to constantly change the key being used to encrypt? If someone knows the answer :)

10:00 - Cryptographic directions in Tor: past and future

tl;dw: not much crypto at first, now crypto, in the future more weird crypto?

Here's a blogpost from Tom Ritter about tagging attacks. The idea: the first node XOR some data to the ciphertext, the third node sees the modified data in clear (if the data is not going through https). So with two evil nodes, being the first and last, you can know who is visiting what website (traffic correlation).

There was also something about doing it with the sha1, and something about adding a MAC between each relay. But I missed that part, if someone can fill in the blanks for me?

tl;dw: how to do an anonymous survey product with a nice UX (paper is here)

The talk was mostly spent on showing how beautiful the UX was. I would have prefered something clearer on how the protocol was really working (but maybe other understood better than me...)

11:10 - Cryptography in AllJoyn, an Open Source Framework for IoT

tl;dw: the key exchange protocol behind their AllJoyn, the security of devices that uses this AllJoyn api/interface...

What's AllJoyn? Something that you should use in your IoT stuff apparently:

AllJoyn is an open source software framework that makes it easy for devices and apps to discover and communicate with each other. Developers can write applications for interoperability regardless of transport layer, manufacturer, and without the need for Internet access. The software has been and will continue to be openly available for developers to download, and runs on popular platforms such as Linux and Linux-based Android, iOS, and Windows, including many other lightweight real-time operating systems.

SAW supports analysis of programs written in C, Java™, MATLAB®, and Cryptol, and uses efficient SAT and SMT solvers such as ABC and Yices.

12:00 - The first Levchin prize for contributions to real-word cryptography

tl;dw: dude with a lot of money decides to give some to influencal cryptographers every year, also gives them his name as a reward.

The Levchin prize honors significant contributions to real-world cryptography. The award celebrates recent advances that have had a major impact on the practice of cryptography and its use in real-world systems. Up to two awards will be given every year and each carries a prize of $10,000.

$10,000, twice a year. It's the first edition. Max Levchin is the co-founder of paypal, he likes puzzles.

I won't comment on that. Everything is in these slides: 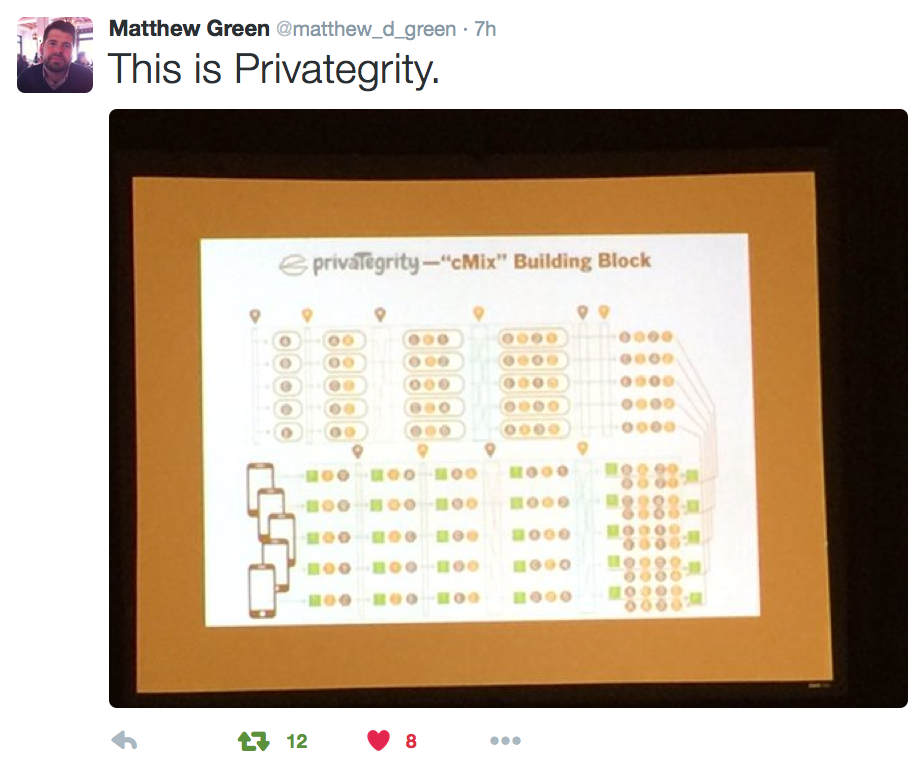 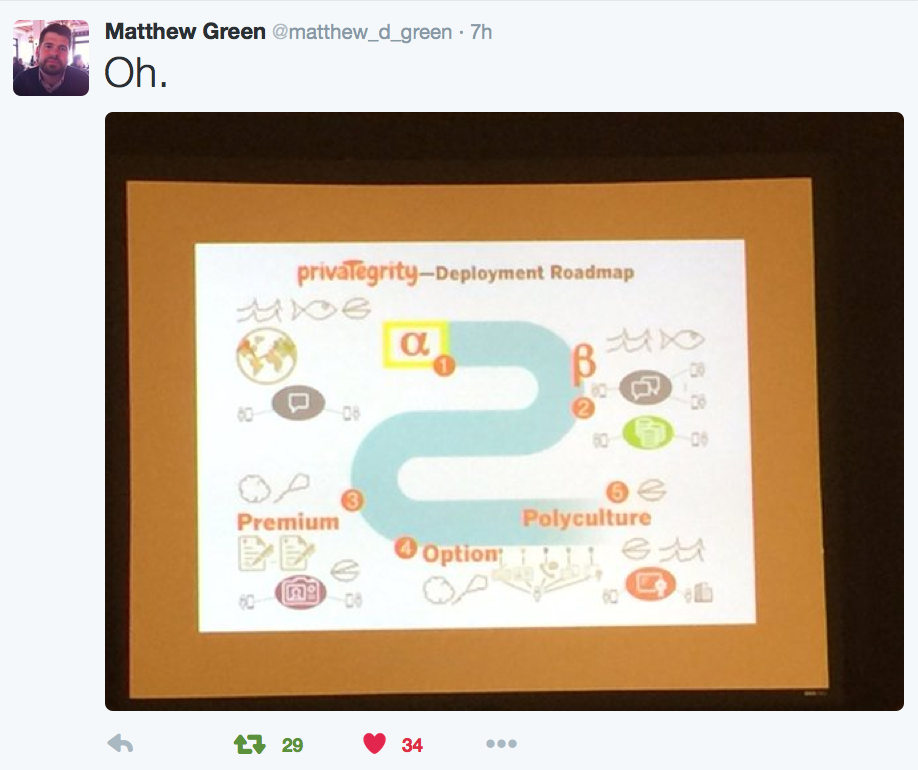 I mean seriously, if you use slides like that, and talk really loud, people will think you are a genius? Or maybe the inverse. I'm really confused as to why that guy was authorized to give a talk.

A direct-recording electronic (DRE) voting machine records votes by means of a ballot display provided with mechanical or electro-optical components that can be activated by the voter (typically buttons or a touchscreen); that processes data by means of a computer program; and that records voting data and ballot images in memory components. After the election it produces a tabulation of the voting data stored in a removable memory component and as printed copy. The system may also provide a means for transmitting individual ballots or vote totals to a central location for consolidating and reporting results from precincts at the central location. The device started to be massively used in 1996, in Brazil, where 100% of the elections voting system is carried out using machines. In 2004, 28.9% of the registered voters in the United States used some type of direct recording electronic voting system, up from 7.7% in 1996.

There was this diagram where a client would send something to the server, if he didn't have the right ticket it wouldn't work, otherwise it would work... If you understood that part please tell me :)

Someone from the audience: "no cool name and logo?"

16:40 - The State of Transport Security in the E-Mail Ecosystem

10 minutes of (painful) talk (but good job nonetheless Aaron: you went through to the end).

tl;dw: users get certificate errors browsing the net because their clock is not correct. 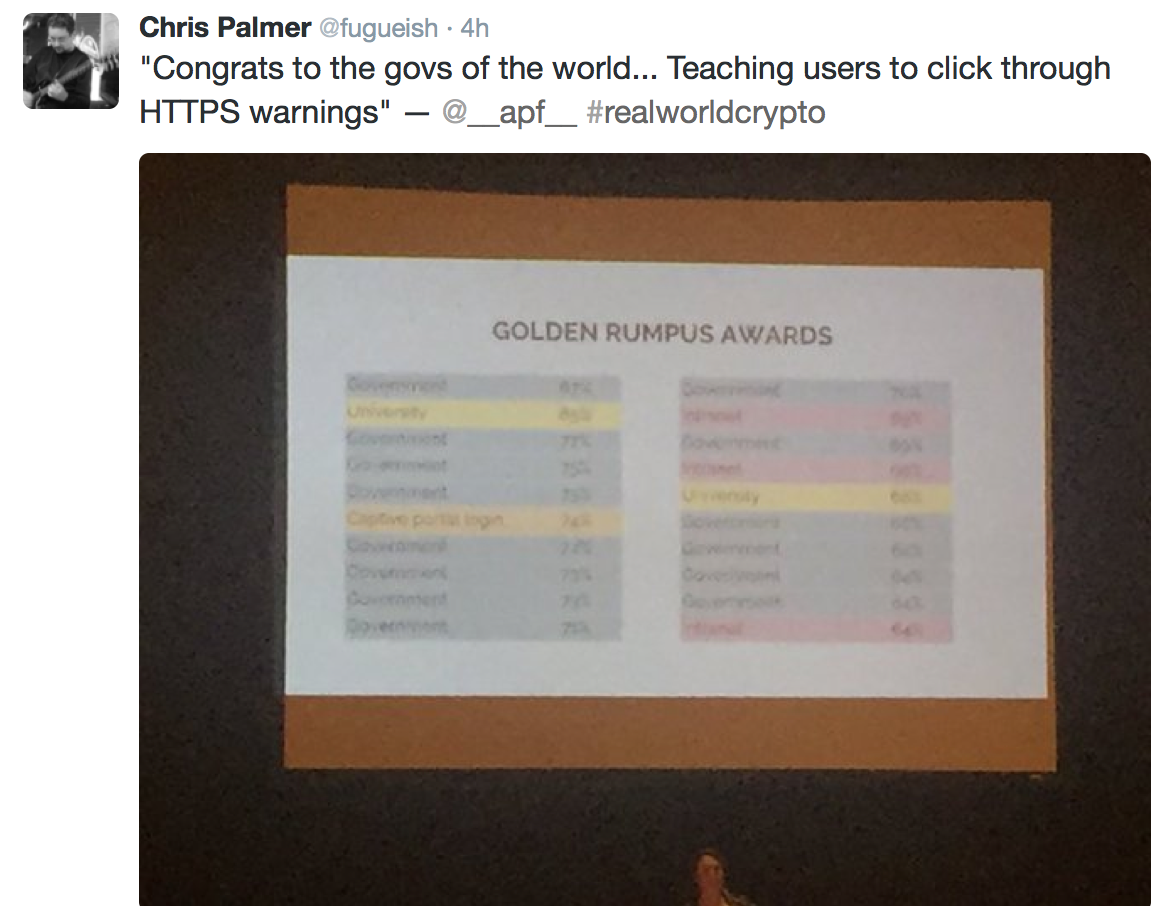 Someone in the public is suggesting that this is because the governments are trying to teach people to ignore these errors (obviously joking). Another one is saying that they might want users to add their "special certificate". Because it can overrides HSTS on rogue certificates. Don't know if this is true. But I'm thinking, why not add certificates for only the website that requests it. Like a certificate jail. Or maybe save the certificate in a different "user-added" folder, websites being signed by certificates from this folder would make chrome display "this website is signed by a certificate you added. If you think this is not normal blablabla".

APF is talking about how they are scared that users will get desensitized by errors, but why display errors? Why not just display a warning. That would annoy real servers and oblige them to get their certs in order, that would make the users suspicious but not unable to access their website (and to google for solutions like "just add the certificates in your root store").

Watson Ladd (that the host recognized) asked her how far from the real time the clock were setup. He thought maybe it could be the battery killing the laptop, NTP not working right away (I missed why) and so the time difference would be negative. In my understanding the clock difference was causing a problem because of certificates notBefore or notAfter fields, so that wouldn't be a problem.

Also people are wondering why these clocks are different, if they should fix it for the user? But maybe not since it might be that the user want his clock to be incorrect... I just remember a time when I would purposely modify the time so that I could keep using my time limited trials (photoshop?).

Great quick writeup. Thanks for that!

Great coverage of the talks! A minor comment on the "software check itself" issue. Still nonsensical, but the voting software checks the hashes of its own files at boot time. :)

There are lots of other details in https://sites.google.com/site/dfaranha/projects/report-voting.pdf

Thanks for the precision Diego! I was wondering what it meant. So I guess this is non-sense because you can just remove this check if you can modify the program

Nothing about Bitcoin... which is good for a change! Great summary :)

David Chaum is one of the greatest computer and cryptography men that ever lived. People just do not understand what he is doing. He lead the ONR to develop TOR and then the Admirals released it to cover agents comms worldwide It works well but if David Chaum says he has an end to Crypto wars bet your ass he does. I have been in Communications and Intelligence for 49 years and I have never seen David Chaum fail at anything. He is Crypto. Other than a couple of systems like Chao II which is very good. How many of you can pull 1098 encryption at all times?
I would like to here from you.
Lewis E

I'll just say that you probably had the greatest mind in crypto gathered up in that room, and I couldn't find anyone who understood David Chaum's talk.