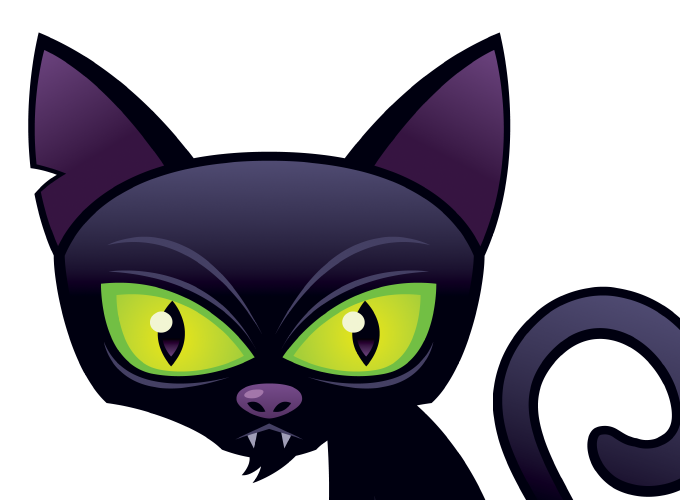 On May 15th, I approached Yuval Yarom with a few issues I had found in some TLS implementations. This led to a collaboration between Eyal Ronen, Robert Gillham, Daniel Genkin, Adi Shamir, Yuval Yarom and I. Spearheaded by Eyal, the research has now been published here. And as you can see, the inventor of RSA himself is now recommending you to deprecate RSA in TLS.

We tested 9 different TLS implementations against cache attacks and 7 were found to be vulnerable: OpenSSL, Amazon s2n, MbedTLS, Apple CoreTLS, Mozilla NSS, WolfSSL, and GnuTLS. The cat is not dead yet, with two lives remaining thanks to BearSSL (developed by my colleague Thomas Pornin) and Google's BoringSSL.

To learn more about the research, you should read the white paper. I will talk specifically about protocol-level exploitation in this blog post.

While Ben-Or et al. research was initially used to support the security proofs of RSA, it was none-the-less already enough to attack the protocol. But it is only in 1998 that Daniel Bleichenbacher discovers a padding oracle and devise his own practical attack on RSA. The consequences are severe, most TLS implementations could be broken, thus mitigations were designed to prevent Daniel's attack. Follows a series of "re-discovery" where the world realizes that it is not so easy to implement such mitigations:

Let's be realistic, the mitigations that developers had to implement were unrealistic. Furthermore, an implementation that would attempt to log such attacks would actually help the attacks. Isn't that funny?

The research I'm talking about today can be seen as one more of these "re-discovery". My previous boss' boss (Scott Stender) once told me: "you can either be the first paper on the subject, or the best written one, or the last one". We're definitely not the first one, I don't know if we write that well, but we sure are hopping to be the last one :)

Briefly, SSL/TLS (except TLS 1.3) can use an RSA key exchange during a handshake to negotiate a shared secret. An RSA key exchange is pretty straight forward: the client encrypts a shared secret under the server's RSA public key, then the server receives it and decrypts it. If we can use our attack to decrypt this value, we can then passively decrypt the session (and obtain a cookie for example) or we can actively impersonate one of the peer.

We employ the BEAST-attack model (in addition to being colocated with the victim server for the cache attack) which I have previously explained in a video here.

With this position, we then attempt to decrypt the session between a victim client (Bob) and bank.com: we can serve him with some javascript content that will continuously attempt new connections on bank.com. (If it doesn't attempt a new connection, we can force it by making the current one fail since we're in the middle.)

Why several connections instead of just one? Because most browsers (except Firefox which we can fool) will time out after some time (usually 30s). If an RSA key exchange is negotiated between the two peers: it's great, we have all the time in the world to passively attack the protocol. If an RSA key exchange is NOT negotiated: we need to actively attack the session to either downgrade or fake the server's RSA signature (more on that later). This takes time, because the attack requires us to send thousands of messages to the server. It will likely fail. But if we can try again, many times? It will likely succeed after a few trials. And that is why we continuously send connection attempts to bank.com.

There exist two ways to attack TLS 1.3. In each attack, the server needs to support an older version of the protocol as well.

While TLS 1.3 does not use the RSA encryption algorithm for its key exchanges, it does use the signature algorithm of RSA for it; if the server’s certificate contain an RSA public key, it will be used to sign its ephemeral public keys during the handshake. A TLS 1.3 client can advertise which RSA signature algorithm it wants to support (if any) between RSA and RSA-PSS. As most TLS 1.2 servers already provide support for RSA , most will re-use their certificates instead of updating to the more recent RSA-PSS. RSA digital signatures specified per the standard are really close to the RSA encryption algorithm specified by the same document, so close that Bleichenbacher’s decryption attack on RSA encryption also works to forge RSA signatures. Intuitivelly, we have $pms^e$ and the decryption attack allows us to find $(pms^e)^d = pms$, for forging signatures we can pretend that the content to be signed $tbs$ (see RFC 8446) is $tbs = pms^e$ and obtain $tbs^d$ via the attack, which is by definition the signature over the message $tbs$. However, this signature forgery requires an additional step (blinding) in the conventional Bleichenbacher attack (in practice this can lead to hundreds of thousands of additional messages). 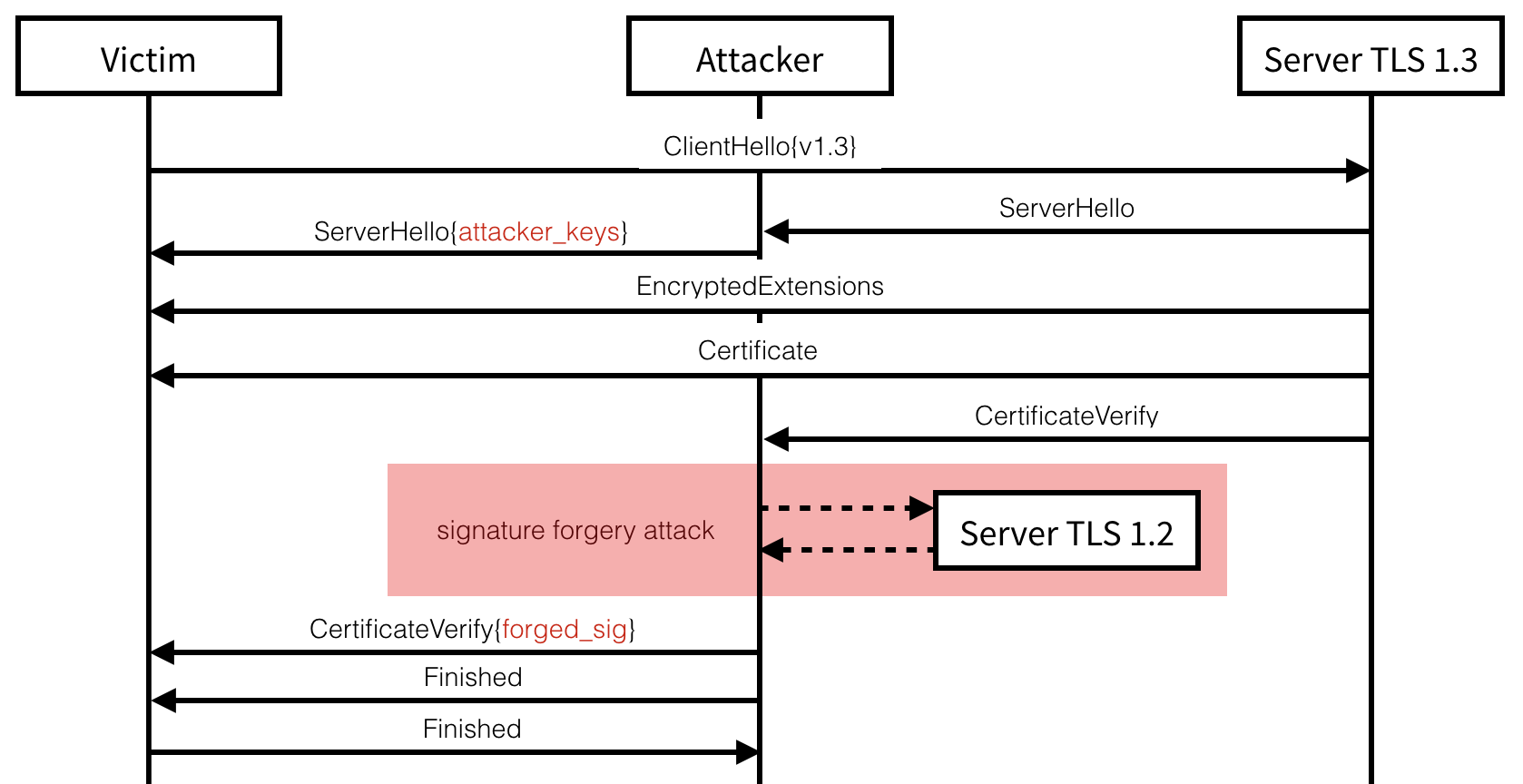 Key-Reuse has been shown in the past to allow for complex cross-protocol attacks on TLS. Indeed, we can successfully forge our own signature of the handshake transcript (contained in the CertificateVerify message) by negotiating a previous version of TLS with the same server. The attack can be carried if this new connection exposes a length or bleichenbacher oracle with a certificate using the same RSA key but for key exchanges.

Every TLS connection starts with a negotiation of the TLS version and other connection attributes. As the new version of TLS (1.3) does not offer an RSA key exchange, the exploitation of our attack must first begin with a downgrade to an older version of TLS. TLS 1.3 being relatively recent (August 2018), most servers supporting it will also support older versions of TLS (which all provide support for RSA key exchanges). A server not supporting TLS 1.3 would thus respond with an older TLS version’s (TLS 1.2 in our example) server hello message. To downgrade a client’s connection attempt, we can simply spoof this answer from the server. Besides protocol downgrades, other techniques exist to force browser clients to fallback onto older TLS versions: network glitches, a spoofed TCP RST packet, a lack of response, etc. (see POODLE) 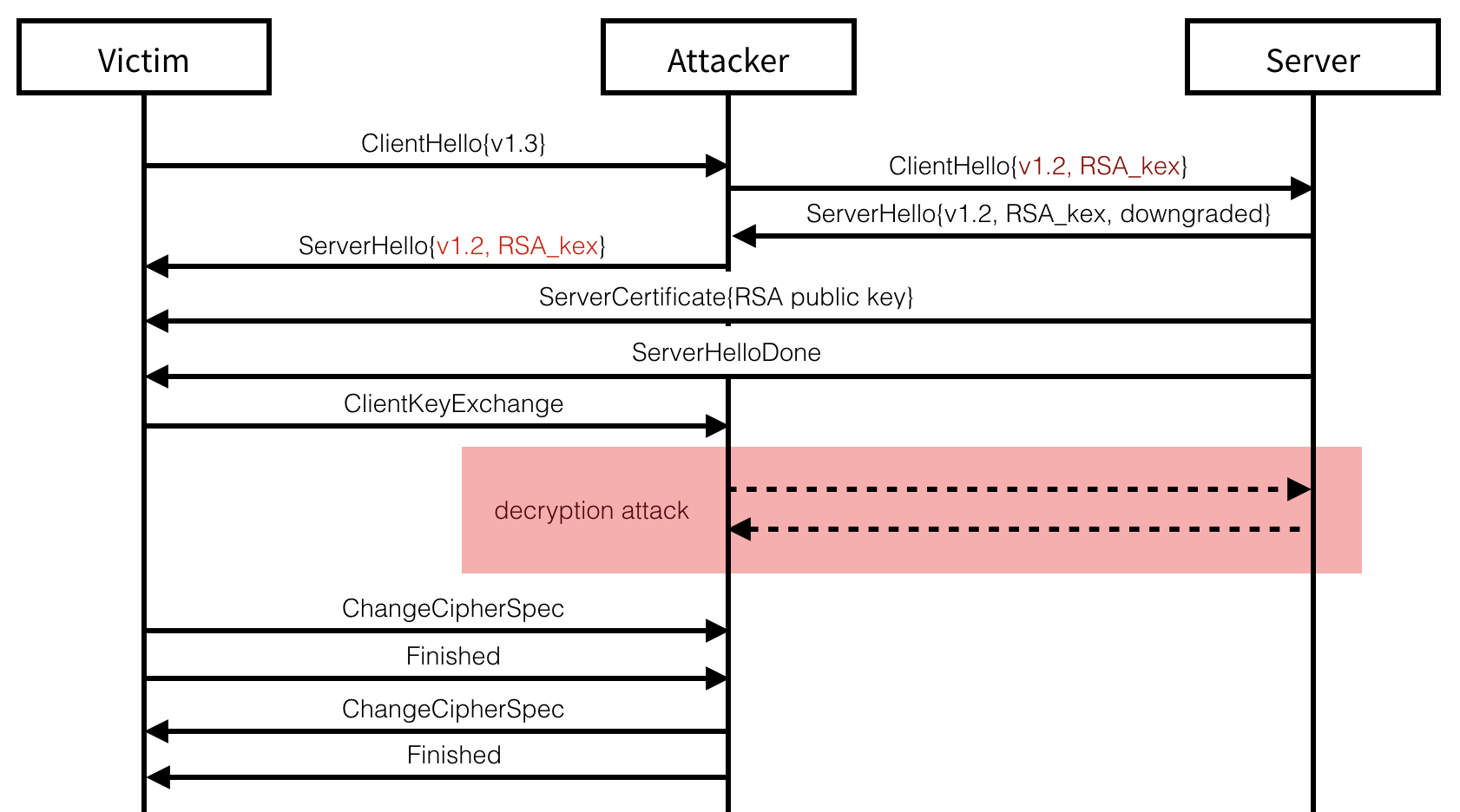 Continuing with a spoofed TLS 1.2 handshake, we can simply present the server’s RSA certificate in a ServerCertificate message and then end the handshake with a ServerHelloDone message. At this point, if the server does not have a trusted certificate allowing for RSA key exchanges, or if the client refuse to support RSA key exchanges or older versions than TLS 1.2, the attack is stopped. Otherwise, the client uses the RSA public key contained in the certificate to encrypt the TLS premaster secret, sends it in a ClientKeyExchange message and ends its part of the handshake with a ChangeCipherSpec and a Finished messages.

At this point, we need to perform our attack in order to decrypt the RSA encrypted premaster secret. The last Finished message that we send must contains an authentication tag (with HMAC) of the whole transcript, in addition of being encrypted with the transport keys derived from the premaster secret. While some clients will have no handshake timeouts, most serious applications like browsers will give up on the connection attempt if our response takes too much time to arrive. While the attack only takes a few thousand of messages, this might still be too much in practice. Fortunately, several techniques exist to slow down the handshake:

Once the decryption attack terminates, we can send the expected Finished message to the client and finalize the handshake. From there everything is possible, from passively relaying and observing messages to the impersonated server through to actively tampering requests made to it. This downgrade attack bypasses multiple downgrade mitigations: one server-side and two client-side. TLS 1.3 servers that negotiate older versions of TLS must advertise this information to their peers. This is done by setting a quarter of the bytes from the server_random field in the ServerHello message to a known value. TLS 1.3 clients that end up negotiating an older version of TLS must check for these values and abort the handshake if found. But as noted by the RFC, “It does not provide downgrade protection when static RSA is used.” – Since we alter this value to remove the warning bytes, the client has no opportunity to detect our attack. On the other hand, a TLS 1.3 client that ends up falling back to an older version of TLS must advertise this information in their subsequent client hellos, since we impersonate the server we can simply ignore this warning. Furthermore, a client also includes the version used by the client hello inside of the encrypted premaster secret. For the same reason as previously, this mitigation has no effect on our attack. As it stands, RSA is the only known downgrade attack on TLS 1.3, which we are the first to successfuly exploit in this research.

As with the previous attack, both the client and the server targetted need to support RSA key exchanges. As this is a typical key exchange most known browsers and servers support them, although they will often prefer to negotiate a forward secret key exchange based on ephemeral versions of the Elliptic Curve or Finite Field Diffie-Hellman key exchanges. This is done as part of the cipher suite negotiation during the first two handshake messages. To avoid this outcome, the ClientHello message can be intercepted and modified to strip it out of any non-RSA key exchanges advertised. The server will then only choose from a set of RSA-key-exchange-based cipher suites which will allow us to perform the same attack as previously discussed. Our modification of the ClientHello message can only be detected with the Finished message authenticating the correct handshake transcript, but since we are in control of this message we can forge the expected tag. 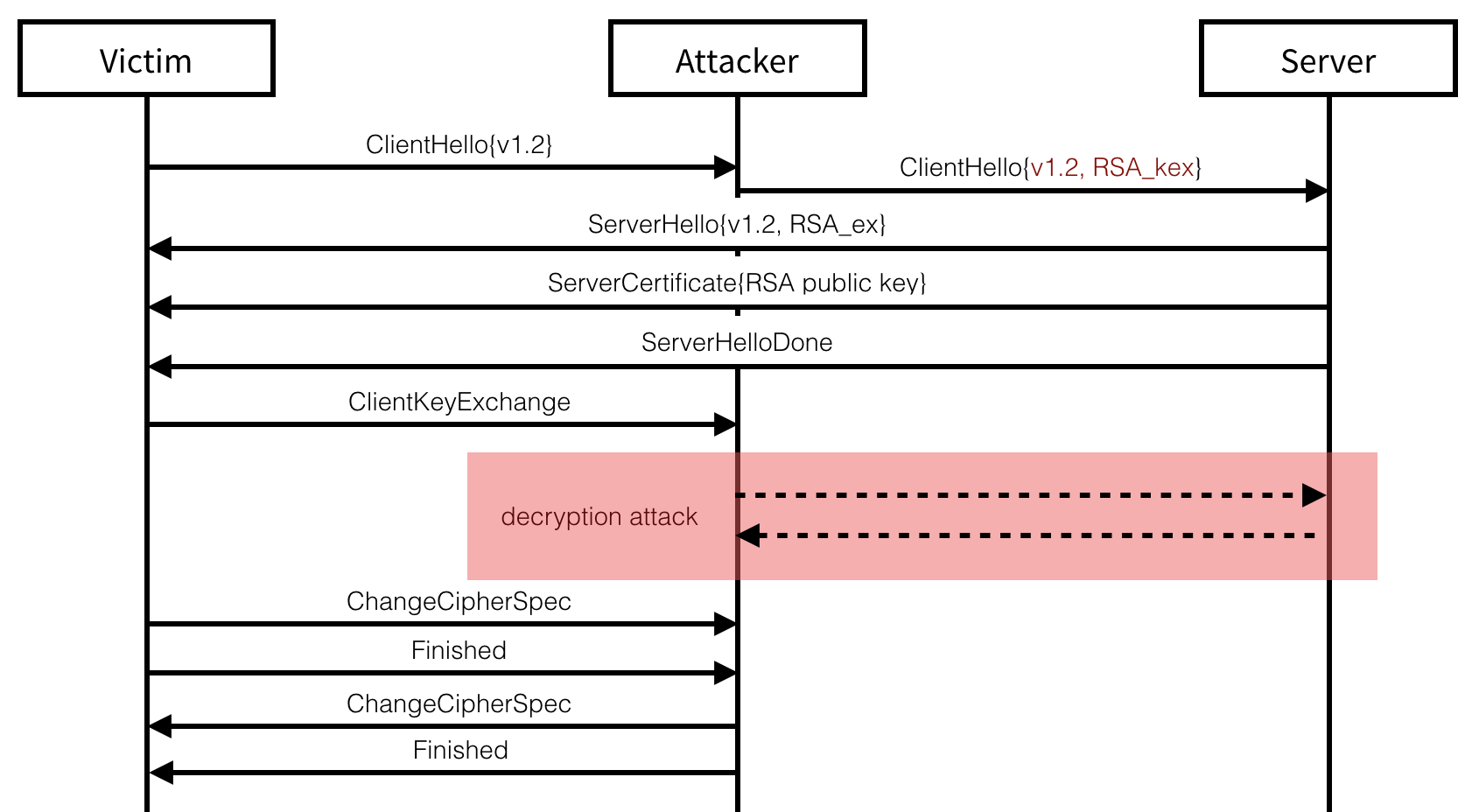 On the other side, if both peers end up negotiating an RSA key exchange on their own, we can passively observe the connection and take our time to break the session.

Hello, where is LIbreSSL?