If you don't know about QUIC, go read the excellent Cloudflare post about it. If you're lazy, just think about it as:

There is more to it, it makes HTTP blazing fast with multiplexed streams and all, but I'm only interested about the crypto here.

Google QUIC's (or gQUIC) default encryption was provided by a home-made crypto protocol called QUIC Crypto. The thing is documented in a 14-page doc file and is more or less up-to-date. It was at some point agreed that things needed to get standardized, and thus the process of making QUIC an RFC (or RFCs) began.

Unfortunately QUIC Crypto did not make it and the IETF decided to replace it with TLS 1.3 for diverse reasons.

Why "Unfortunately" do you ask?

Well, as Adam Langley puts it in some of his slides. The protocol was dead simple: 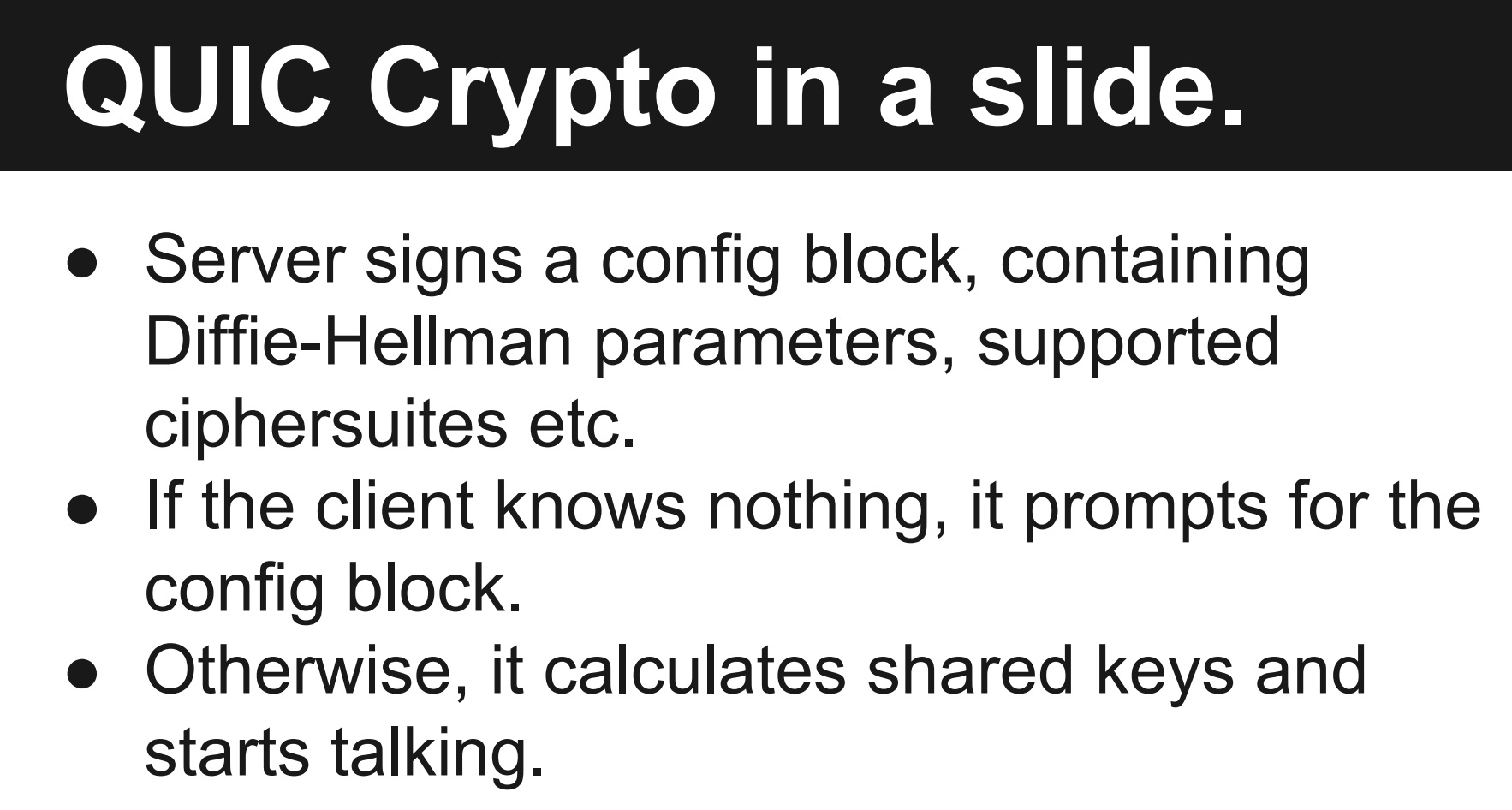 While the protocol had some flaws, in the end, it was still a beautiful and elegant protocol. At its core was an extremely straight forward and linear state machine summed up by this diagram: 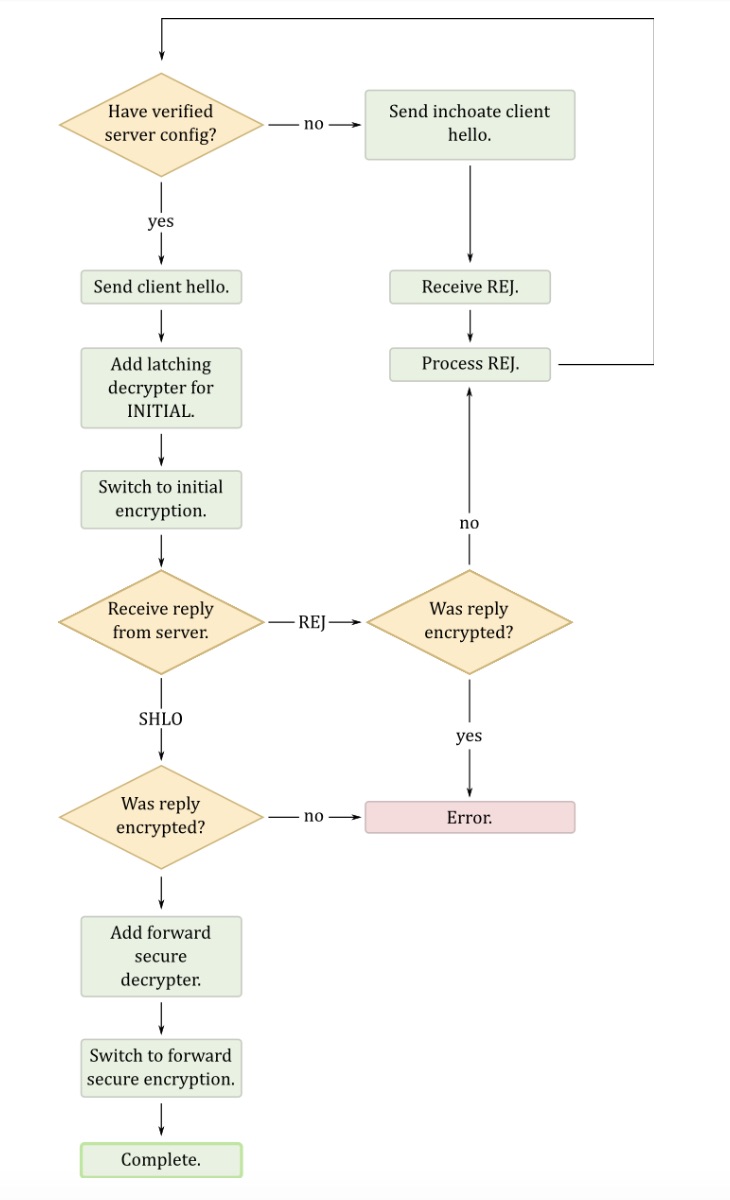 A few things to help you read it:

As you can see there isn't much going on, if you know the keys of the server you can do some 0-RTT magic, if you don't then request the keys and start the handshake again.

Compare that to the state machine of TLS 1.3: 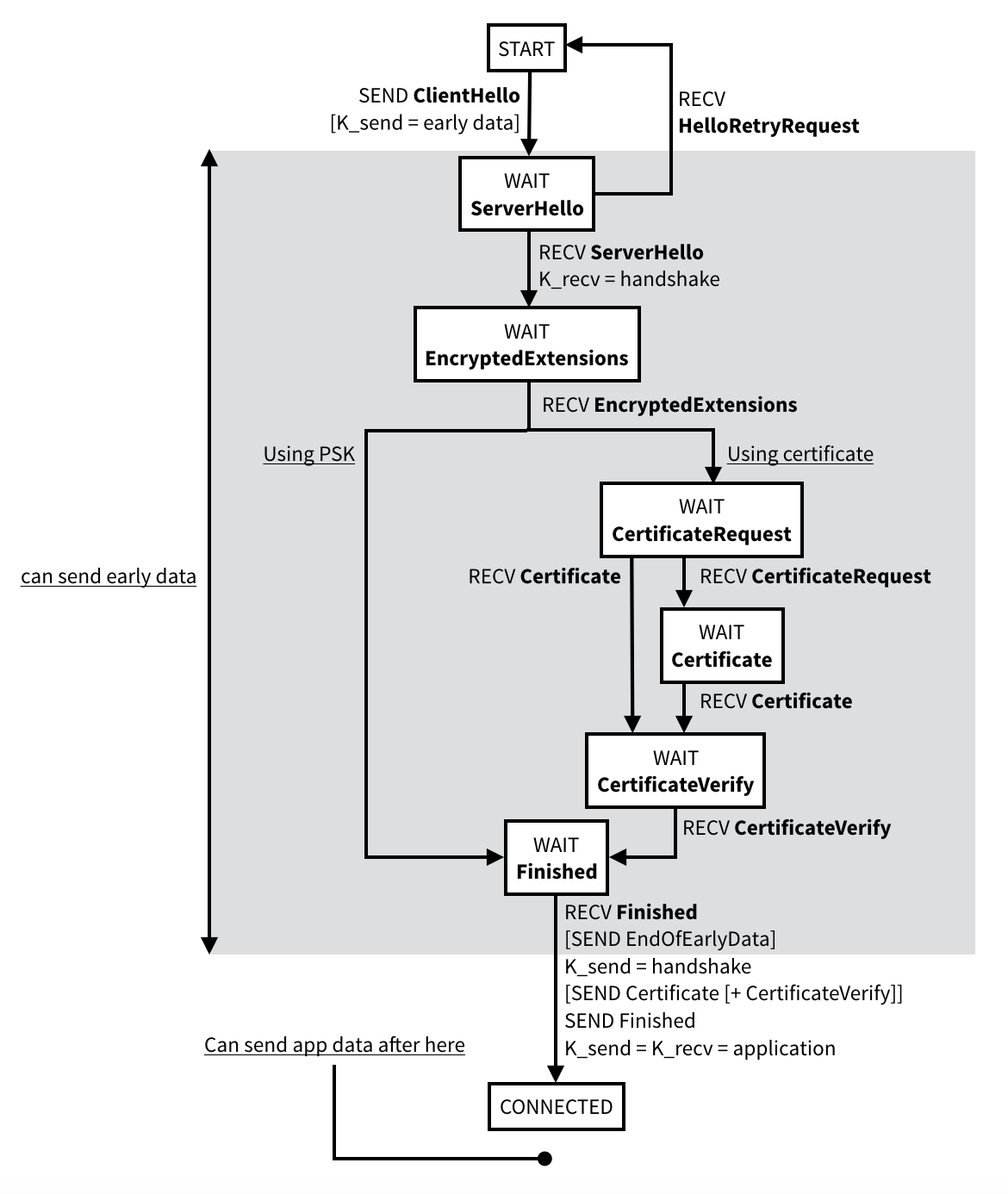 In the end, TLS 1.3 is a solid protocol, but I'd like to see more experimentation here instead of just relying on TLS. version 1.3 is built on top of numerous previous failed versions which means a great amount of complexity due to legacy and a multitude of use cases and extensions it needs to support. Simpler protocols should be better, simple state machines make for better analysis and more secure implementations. Just look at the Noise protocol framework and its 1k LOC implementations and its symbolic proofs done with ProVerif and Tamarin. Actually, why haven't we started using Noise for everything?

Hi, just to note, Noise protocol framework link is pointing to this blog instead of noiseprotocol.org.
Thanks for blog post!

Presenting the TLS 1.3 state machine in the same flowchart format as for the QUIC protocol (instead of an ASCII diagram) would probably save you from accusations of trying to introduce a subconscious bias in your readers against either of the two protocols. Also it would make them easier to compare at a glance...

unfortunately no such diagram exist, but I am planning to make one :) stay tuned