Some unrelated rambling about counter strike posted 3 weeks ago

When I was younger, I used to play a lot of counter strike (CS). CS was (and still is) this first-person shooter game where a team of terrorists would play against a team of counter terrorists. Victory would follow from successfully bombing a site or killing all the terrorists. Pretty simple. I discovered the game at a young age, and I got hooked right away. You could play with other people in cyber cafes, and if you had a computer at home with an internet connection you could even play with others online. This was just insane! But what really hooked me was the competitive aspect of the game. If you wanted, you could team up with 4 other players and play matches against others. This was all new to me, and I progressively spent more and more hours playing the game. That is, until I ended up last of my class, flunked my last year of highschool, failed the Bacalaureat. I decided to re-prioritize my passion in gaming in order not to fail at the path that was laid in front of me. But a number of lessons stayed with me, and I always thought I should write about them.

My first lesson was how intense competition is. I never had any experience come close to it since then, and miss competition dearly. Once you start competing, and you start getting good at it, you feel the need to do everything to get the advantage. Back then, I would watch every frag movie that came out (even producing some), I would know all the best players of every clan (and regularly play with them), and I would participate in 3 online tournaments a day. I would wake up every day around noon, play the first tournament at 1pm, then practice the afternoon, then play the tournament of 9pm, and then the last one at 1am. If my team lost, I would volunteer to replace a player dropping out from a winning team. Rinse and repeat, every day. There's no doubt in my mind that I must have reached Gladwell's 10,000 hours.

I used the same kind of technique years later when I started my master in cryptography. I thought: I know how to become the best at something, I just have to do it all the time, constantly. I just need to obsess. So I started blogging here, I started subscribing to a number of blogs on cryptography and security and I would read everything I could every single hours of every day. I became a sponge, and severally addicted to RSS feeds. Of course, reading about cryptography is not as easy as playing video games and I could never maintain the kind of long hours I would when I was playing counter strike. I felt good, years later, when I decided to not care as much about new notifications in my RSS feed.

Younger, my dream was to train with a team for a week in a gaming house, which is something that some teams were starting to do. You'd go stay in some house together for a week, and every day practice and play games together. It really sounded amazing. Spend all my hours with people who cared as much as me. It seemed like a career in gaming was possible, as more and more money was starting to pour into esport. Some players started getting salaries, and even coaches and managers. It was a crazy time, and I felt really sad when I decided to stop playing. I knew a life competing in esport didn't make sense for me, but competition really was fullfiling in a way that most other things proved not to be.

An interesting side effect of playing counter strike every day, competitively, for many years, is that I went through many teams. I'm not sure how many, but probably more than 50, and probably less than 100. A team was usually 5 players, or more (if we had a rotation). We would meet frequently to spend hours practicing together, figuring out new strategies that we could use in our next game, doing practice matches against other teams, and so on. I played with all different kind of people during that time, spending hours on teamspeak and making life-long friendships. One of my friend, I remember, would get salty as fuck when we were losing, and would often scream at us over the microphone. One day we decided to have an intervention, and he agreed to stop using his microphone for a week in order not to get kicked out of the team. This completely cured his raging.

One thing I noticed was that the mood of the team was responsible for a lot in our performance. If we started losing during a game, a kind of "loser" mood would often take over the team. We would become less enthusiastic, some team mates might start raging at the incompetence of their peers, or they might say things that made the whole team want to give up. Once this kind of behavior started, it usually meant we were on a one-way road to a loss. But sometimes, when people kept their focus on the game, and tried to motivate others, we would make incredible come backs. Games were usually played in two halves of 15 rounds. First in 16 would win. We sometimes went from a wooping 0-15 to an insane strike of victories leading us to a 16-15. These were insane games, and I will remember them forever. The common theme between all of those come back stories were in how the whole team faced adversity, together. It really is when things are not going well that you can judge a team. A bad team will sink itself, a strong team will support one another and focus on doing its best, potentially turning the tide.

During this period, I also wrote a web service to create tournaments easily. Most tournaments started using it, and I got some help to translate it in 8 different european languages. Thousands of tournaments got created through the interface, in all kind of games (not just CS). Years later I ended up open sourcing the tool for others to use. This really made me understand how much I loved creating products, and writing code that others could directly use.

Today I have almost no proof of that time, besides a few IRC screenshots. (I was completely addicted to IRC.) 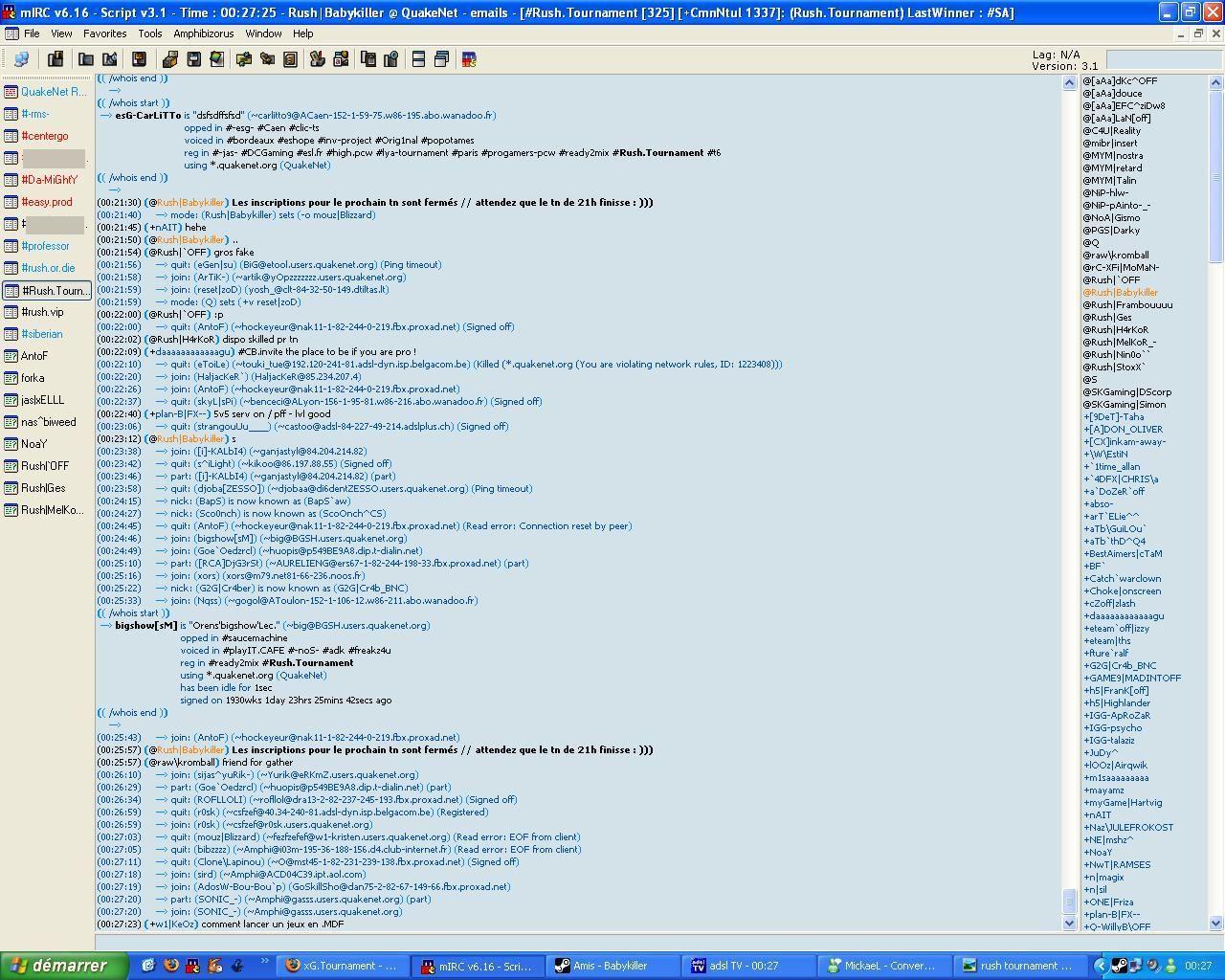