Updates on How to Backdoor Diffie-Hellman posted January 2018

Early in 2016, I published a whitepaper (here on eprint) on how to backdoor the Diffie-Hellman key agreement algorithm. Inside the whitepaper, I discussed three different ways to construct such a backdoor; two of these were considered nobody-but-us (NOBUS) backdoors.

I wrote this blogpost resuming their discoveries a long time ago, but never took the time to publish it here. In the rest of this post, I'll expect you to have an understanding of the two NOBUS backdoors introduced in my paper. You can find a summary of the ideas here as well.

For those who have attended my talk at Defcon, Toorcon or a meetup; I should assure you that I did not talk about the first (now-known reversible) NOBUS construction. It was left out of the story because it was not such a nice backdoor in the first place. Its security margins were weaker (at the time) compared to the second construction, and it was also harder to implement.

The attack Dorey et al. wrote about comes from a 2005 white paper, where Coron et al. published an attack on a construction based on Diffie-Hellman. But before I can tell you about the attack, I need to refresh your memory on how the baby-step giant-step (BSGS) algorithm works.

This allows us to write two different lists:

Now imagine that you compute these two lists, and that you then stumble upon a collision between elements from these two sets. This would entail that for some \(i\) and \(j\) you have:

Now let's review our first NOBUS construction, detailed in section 4 of my paper. 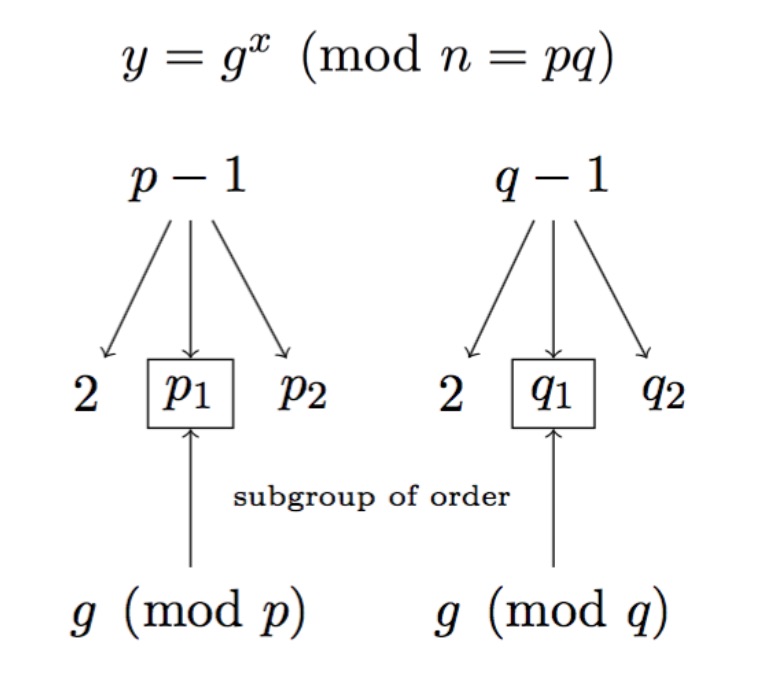 Using BSGS on our construction

At this point, we could try to reverse the construction using BSGS by creating these two lists and hopping for a collision:

Unfortunately, remember that \(p\) is hidden inside of \( n = p q \). We have no knowledge of that factor. Instead, we could calculate these two lists:

And this time, we can test for a collision between two elements of these lists "mod \(p\)" via the \(gcd\) function:

Now here is the that trick Coron et al. found out. They could optimize calls to \(gcd\) down to \(\mathcal{O}(\sqrt{p_1})\), which would make the reversing as easy as using the backdoor. The trick is as follow:

The second NOBUS backdoor construction received a different treatment. If you do not know how this backdoor works I urge you to first watch my talk on the subject.

This could be because the client did not list a DHE (ephemeral Diffie-Hellman) cipher suite in priority, or because the server decided to pick a different kind of key agreement algorithm.

If this is the case, we would observe an exchange that we could not spy on or tamper with via our DHE backdoor.

Dorey et al. discovered that an active man-in-the-middle could change that by tampering with the original client's ClientHello message to single-out a DHE cipher suite (removing the rest of the non-DHE cipher suites) and forcing the key exchange to happen by way of the Diffie-Hellman algorithm.

This works because there are no countermeasures in TLS 1.2 (or prior) to prevent this to happen.

My original white paper has been updated to reflect Dorey et al.'s developments while minimally changing its structure (to retain chronology of the discoveries). You can obtain it here.

Furthermore, let me mention that the new version of TLS —TLS 1.3— will fix all of these issues in two ways: