Press talking about me posted January 2014

Direct Matin Bordeaux, which is a free magazine in Bordeaux that is handed at tram stations everywhere in the city, just wrote an article about me and my last project : 3pages.fr 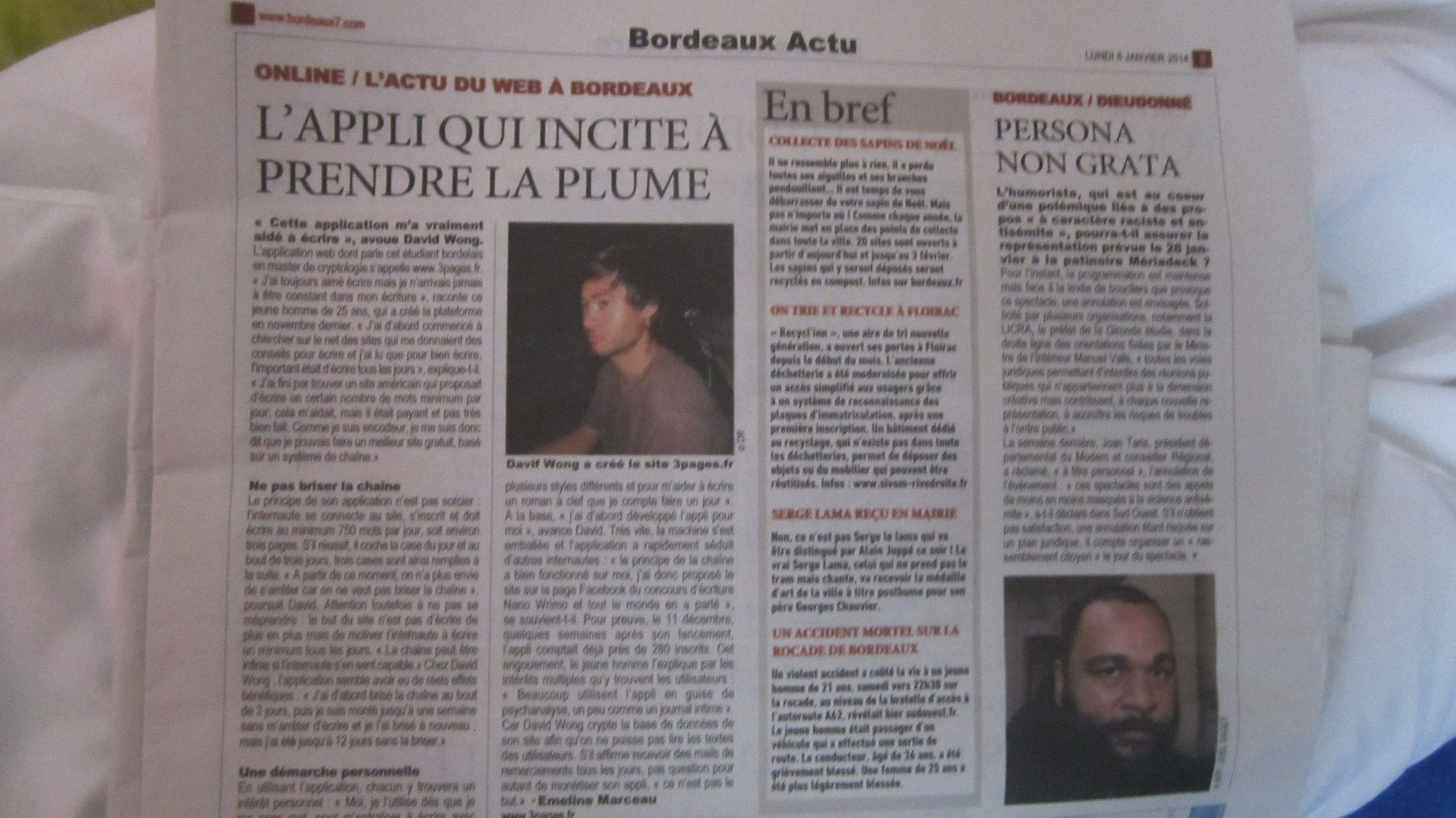 you can read it here

What is the best tool? posted December 2013

Constantly, when I start a new project, I try to look for better tools to do the job.

Lately I've been using CodeIgniter as a PHP MVC, jQuery as a javascript library, Bootstrap as a blueprint and TWIG as a template engine.

I've been noticing numerous people from the CodeIgniter community moving to Laravel, which seems to be pretty awesome. So I look at Laravel, and I think to myself "gosh this looks fun to learn, but I don't have time and I have a lot of projects in mind". And then as I read more and more about Laravel, I see people talking about how RoR is better. And then about how Django is better... This seems like a never ending search for a better technology.

I read somewhere that good coders code, great coders re-use. And more importantly, amazing coders ship. I have to ship code, I have to be productive, and I don't think I should be wasting too much time learning new technologies.

So I want to learn, and I want to ship. And it's hard to do both.

The Monty Hall problem is to me one of the most fascinating probability problem (for it's simpleness and unintuitive results) that got my mind blown since I learned about it in high school.

One day in high school, in my Math class, the teacher told us about that famous problem. Monty Hall was an old and popular TV show in the states were you had to choose a door to open from three different ones. Behind one of them was a car, behind the two others were goats. Obviously, the goal of the game was to win the car (except if you were really into goats, but then I guess you could have bought a lot of those with a car).

Anyway, the tricky part was that when you made a choice, the host asked you to wait before opening it and would open another door, revealing a goat. Then he would give you the opportunity to waive your initial choice and swap door one last time.

Here lies the probability problem. Do you think you would have more chance of winning if you changed your choice?

My math teacher said yes, and I could not believe that, I remember loudly objecting, telling the teacher it was not possible, that it was not logical. I declined what seemed grotesque at the time, I refused to acknowledge such an unintuitive result, such a simple thing, my brain could do the calculation easily so why would you tell me I was wrong on such a trivial thing.

But yes, I was wrong. I knew I was wrong. I was upset at my own mind. I didn't understand how I could be so convinced that changing choice wouldn't change my chances of winning the car. The problem was simple, so simple. And yet my mind couldn't make its way around it.

After many years of training my brain to think differently about probabilities, I can know see how this problem works. 7 years after my first introduction to this problem, I can now grasp a part of it. I understand it, I know the probabilities enrolled in the resolution of this problem, I've learned them at uni and I made the effort to think about that problem quite a lot during those last years. I actually often ask that problem to my friends, to blow their mind. But still, 7 years after being introduced to that problem, I still have troubles finding its probabilities "natural". My brain still cannot process the fact that it HAS to work that way, that the world is turning in that direction and no others.

I hope I didn't send you to sleep with this. If you want to know more about the mathematician who published this result and got insulted by numerous math PHD for being wrong, you can take a stroll on the wikipedia page.

My technique to wire my brain on the right path? Thinking about a hundred doors, 1 car, 99 goats. I open one door, the host closes 98 others. It feels easier to process when told this way, but there is still a part of me, somewhere, that tells me it wouldn't change a thing. Even with 98 doors opened. What is wrong with my brain?

If you still don't believe me, there is a short and visually clear explanation here.

PS: this is one of my go to when I want to be amazed at how unintuitive or how little we know about how things work. If you like that kind of thing, you can also check the twin paradox or the biography of Milton H. Erickson.

I've changed the way I handle articles on this blog. I used to type plain html, but I'm now using the markdown syntax with the php parsedown parser.

So if you see any display errors, please tell me.

There's an AMA on reddit right now from one of the Winklevoss brother. If you never heard of them, they were the one who originally came up with the idea of facebook but got it stolen after trying to hire Zuckerberg to code it. They're pretty famous in the bitcoin community for having bought 11million $ of bitcoins before April's big crash. The wonderful thing is, they hold on to their bitcoin during the crash. They must be very clever people because they're now, richer than ever.

Some of the interesting stuff from that AMA :

Have he sold any bitcoin?

I have yet to sell a single bitcoin.

What's the future of bitcoins?

small bull case scenario for Bitcoin is a 400 billion USD dollar market cap, so 40,000 USD a coin, but I believe it could be much larger. When this will happen, if it happens, I don't know, but if it happens, it will probably happen much faster than anyone imagines.

How did he learn about bitcoins?

Partying on a beach in Ibiza, where else?

I have not invested in any altcoins because I don't believe that any of the "problems" or issues that they address can't be addressed by Bitcoin itself.

There is a dog coin that seems to be a big joke : www.dogecoin.org

The last things we studied in Arithmetic are the Reed-Solomon codes. It's a type of code you use to, not encrypt your information, but create redundant information in your final code. So when you read your code, if there are errors or missing parts, you can still decode it. It's not perfectly redundant like dog's ADN is. The redundant code is changed in a certain way so you can guess what the missing parts are.

A few days ago I was on the road to La Fête des Lumières (in Lyon) with 4 germans I met in Bordeaux. The driver had an old CD with a few mainstream and german songs on it that he wanted to play, problem, the CD was damaged, solution? None. Didn't need a solution. The CD still played, although sometimes it was indeed jumping, most of the time it was playing correctly. How is that?

Well, the information burned on the CD is coded thanks to Reed-Solomon's algorithm so that you can still guess what was burned on it through particular redundant code. This redundant code is (and I'm taking a guess here) what is used when your computer asks you "do you want to check if there was no error?" right after burning your CD.

Ahhhh, what is P, NP, NP-Complete and NP-hard. Found this quick explanation. Still reading on the subject. I feel like It might take me a lot of time until I can be able to explain that easily to someone who has no idea what it is.

Today I was interviewed by Emeline Marceau from Direct Martin Bordeaux, a free newspaper that is directly competing against 20 minutes in France.

I already had my first interview with Vincent Glad from Slate (and now Canal+) 3 years ago. But this is different as it should be printed in a real newspaper with a picture of me. Well nothing is sure yet, crossing fingers.