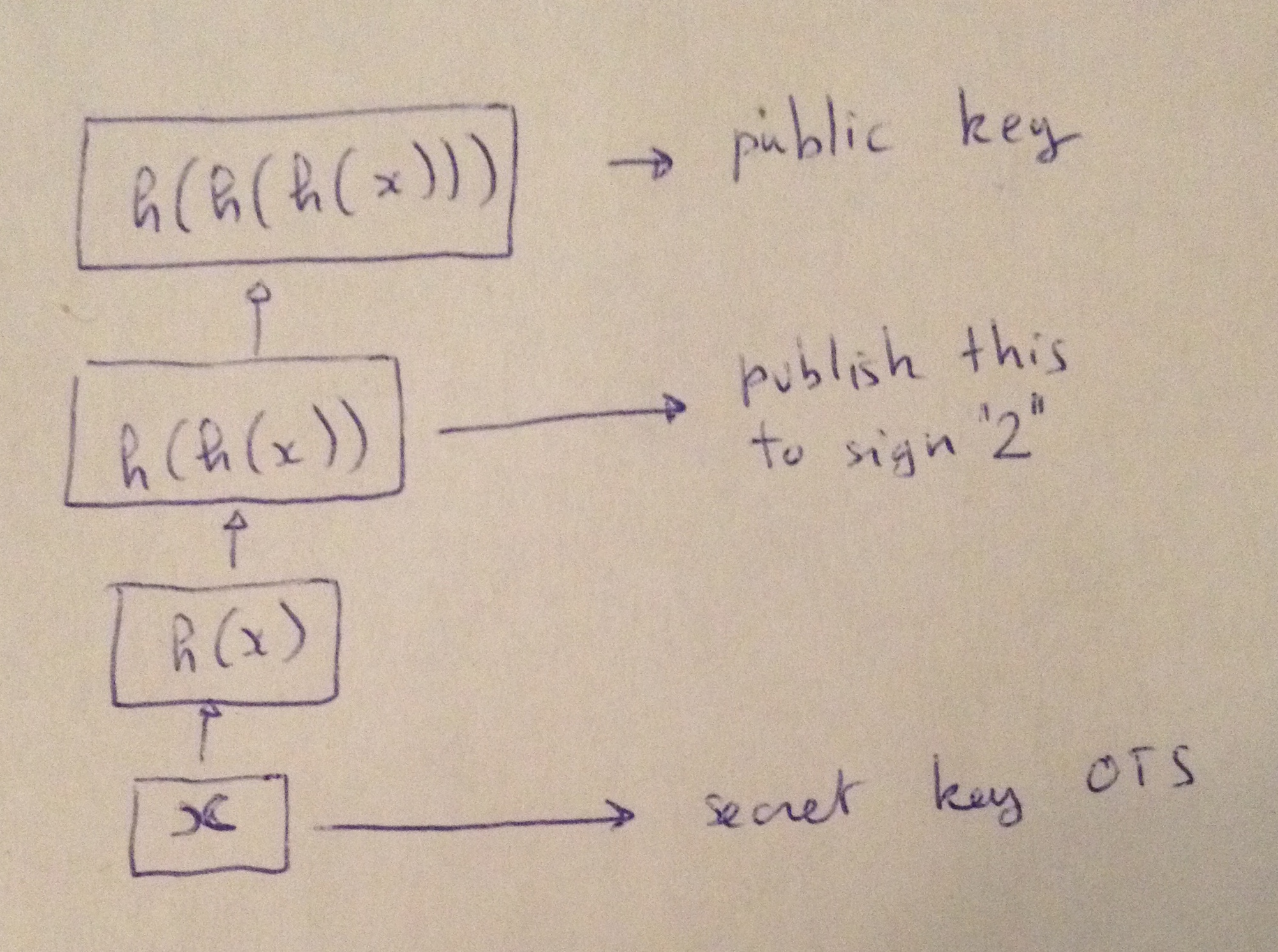 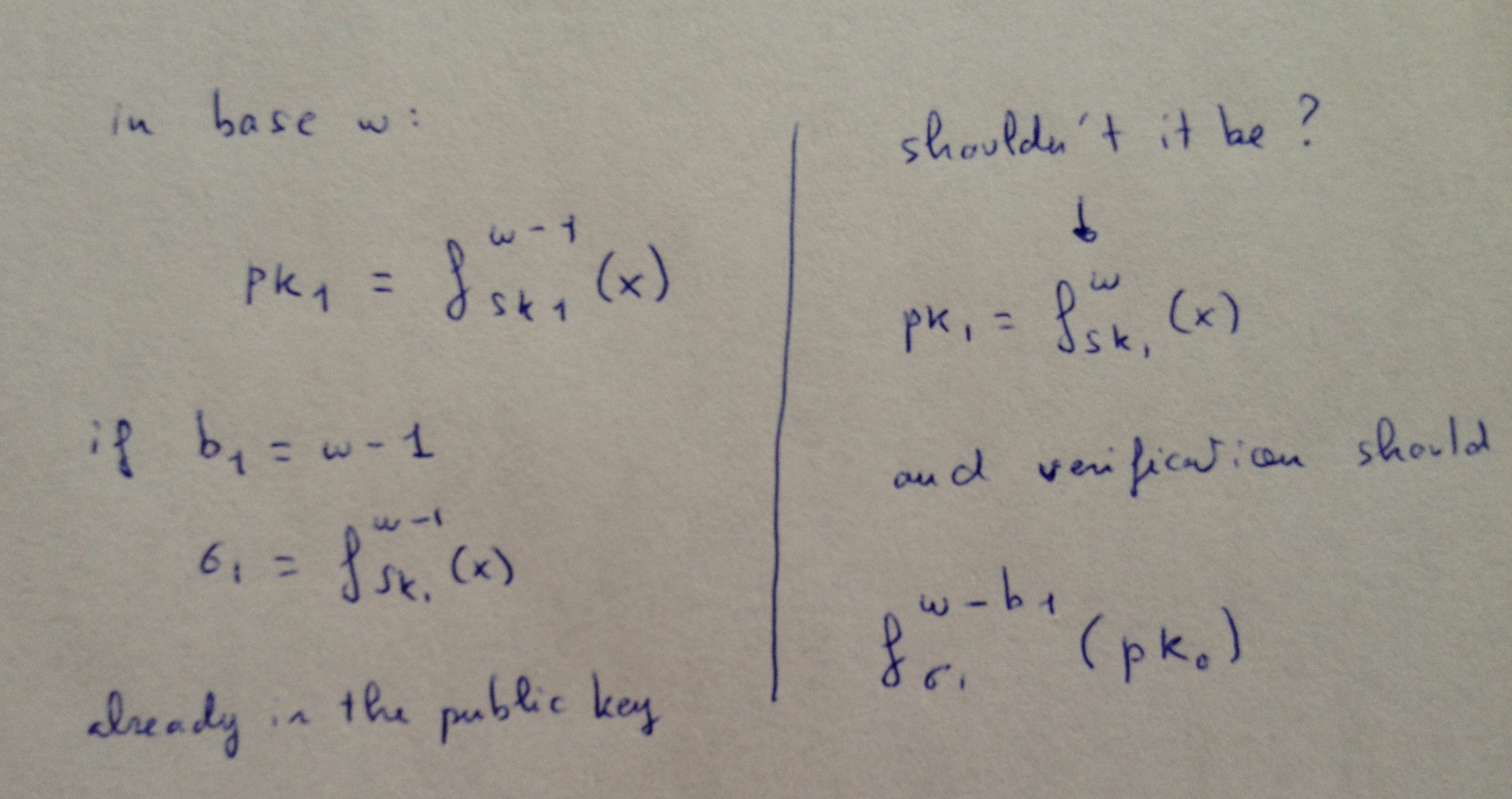 What kind of signature for a post-Quantum world? posted December 2015

What kind of signature should we choose for the future ?

– RSA and ECC are perceived today as being small and fast, but they are broken in polynomial time by Shor’s algorithm. The polynomial is so small that scaling up to secure parameters seems impossible.
– Lattice-based signature schemes are reasonably fast and provide reasonably small signatures and keys for proposed parameters. However, their quanti- tative security levels are highly unclear. It is unsurprising for a lattice-based scheme to promise “100-bit” security for a parameter set in 2012 and to correct this promise to only “75-80 bits” in 2013. Fur- thermore, both of these promises are only against pre-quantum attacks, and it seems likely that the same parameters will be breakable in practice by quantum computers.
– Multivariate-quadratic signature schemes have extremely short signatures, are reasonably fast, and in some cases have public keys short enough for typical applications. However, the long-term security of these schemes is even less clear than the security of lattice-based schemes.
– Code-based signature schemes provide short signatures, and in some cases have been studied enough to support quantitative security conjectures. How- ever, the schemes that have attracted the most security analysis have keys of many megabytes, and would need even larger keys to be secure against quantum computers.

A series of post on hash-based signatures is available here

Asiacrypt is currently going on in New Zealand (since when NZ is in Asia?)

it's a two-track event. There are some talks about everything. From Indistinghuishability Obfuscation to Multi Parti Computation. Seems like a good place to be! I'm waiting for videos/slides/reports about the event. Will edit this post accordingly. 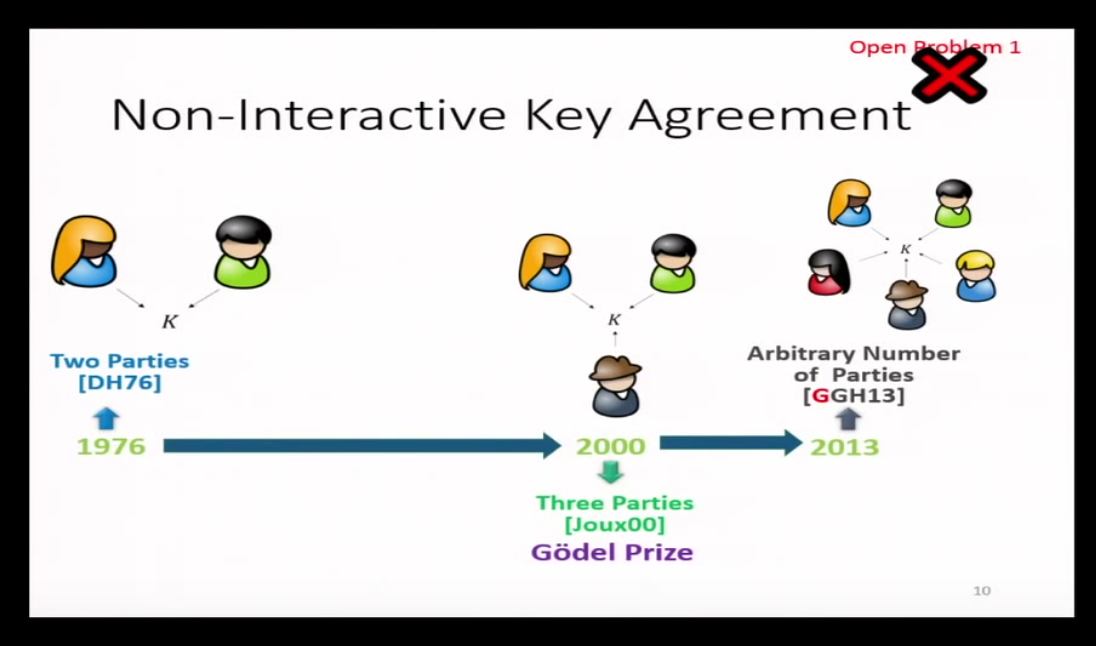 Sometimes I read something interesting, and so I take a screenshot of it. And I know some people glance at this blog hoping to read a short piece that will provide some good knowledge. So here you go.

Taken from a Dan Bernstein's blogpost: 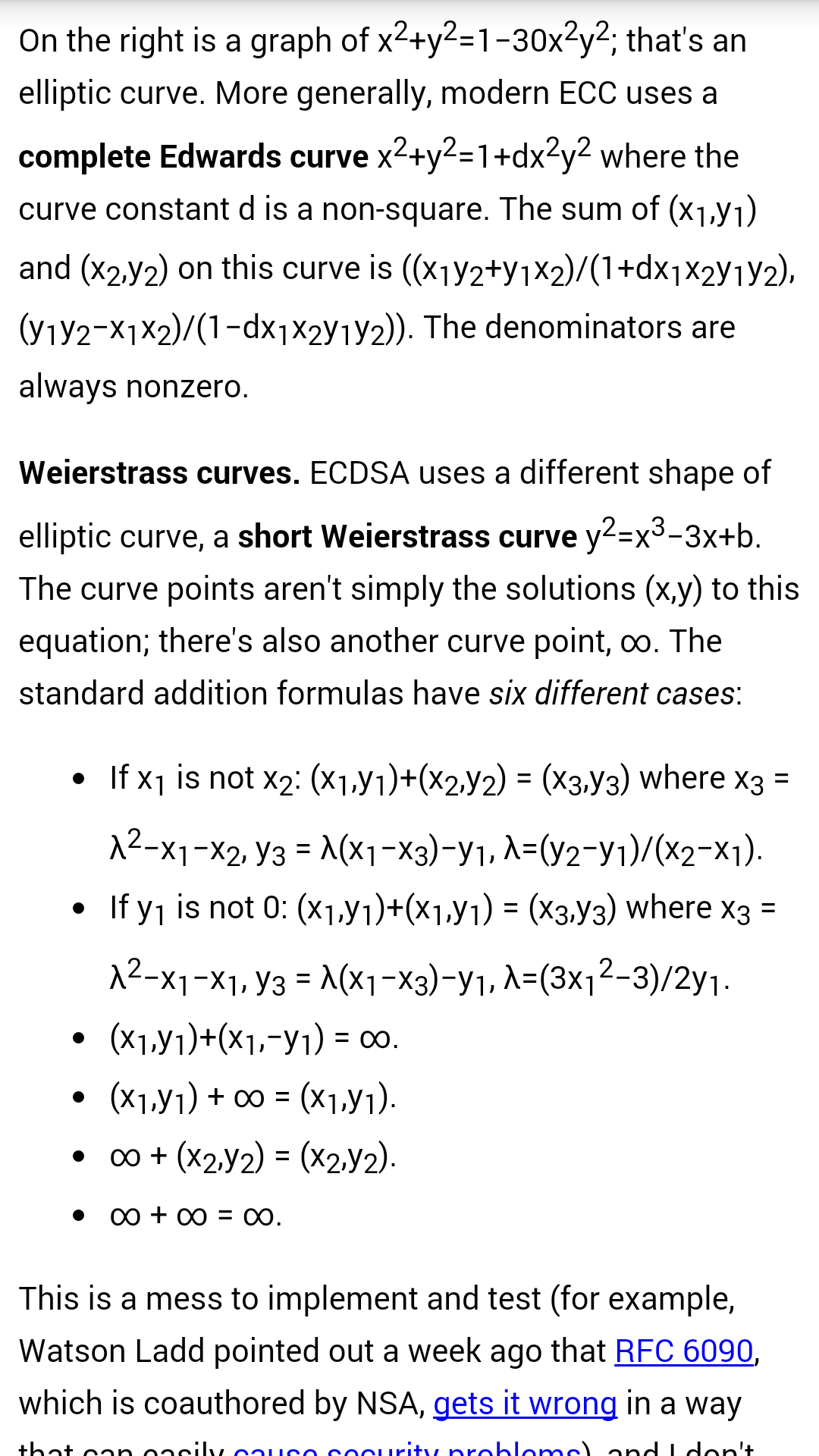 some history on curves 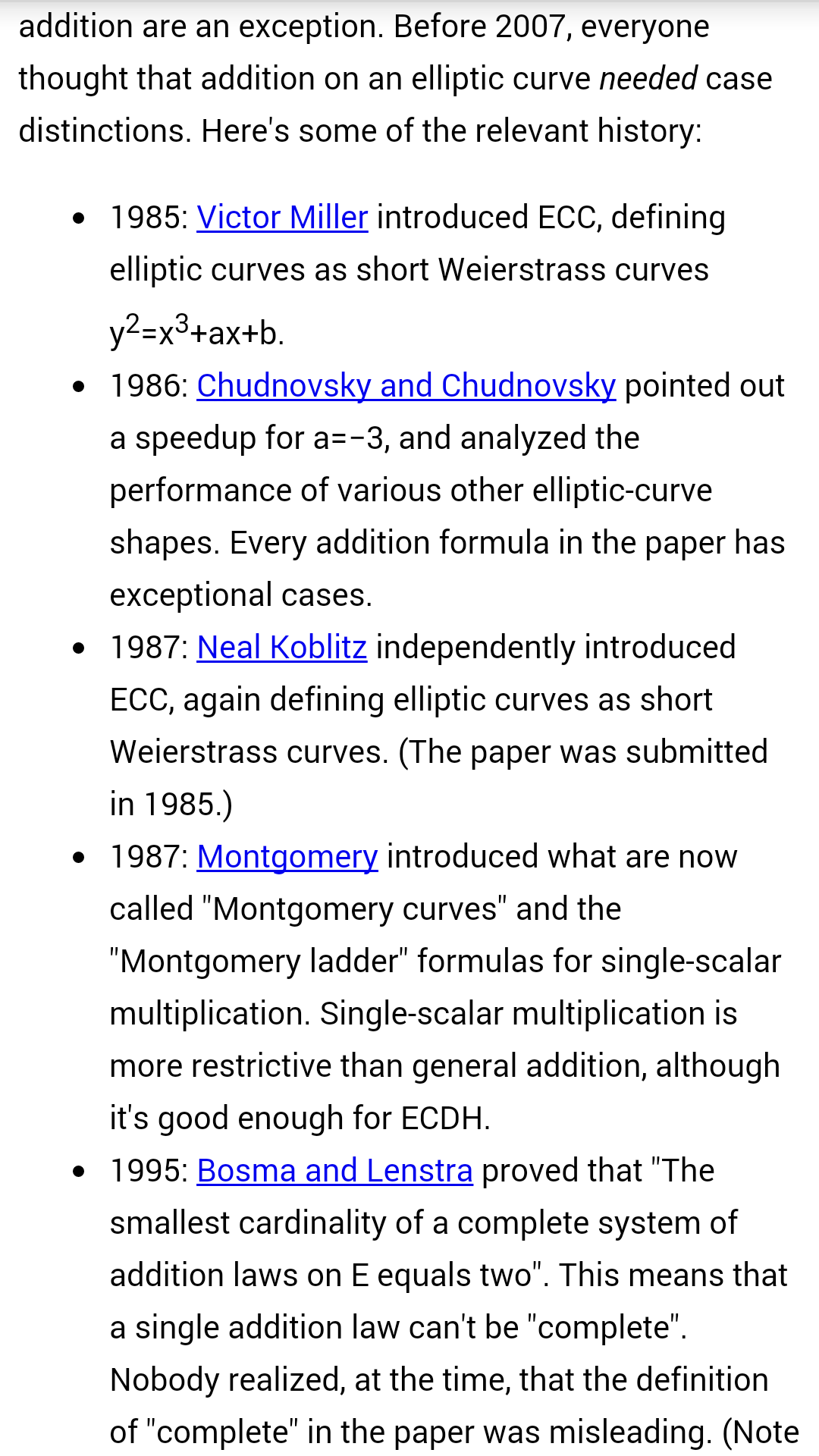 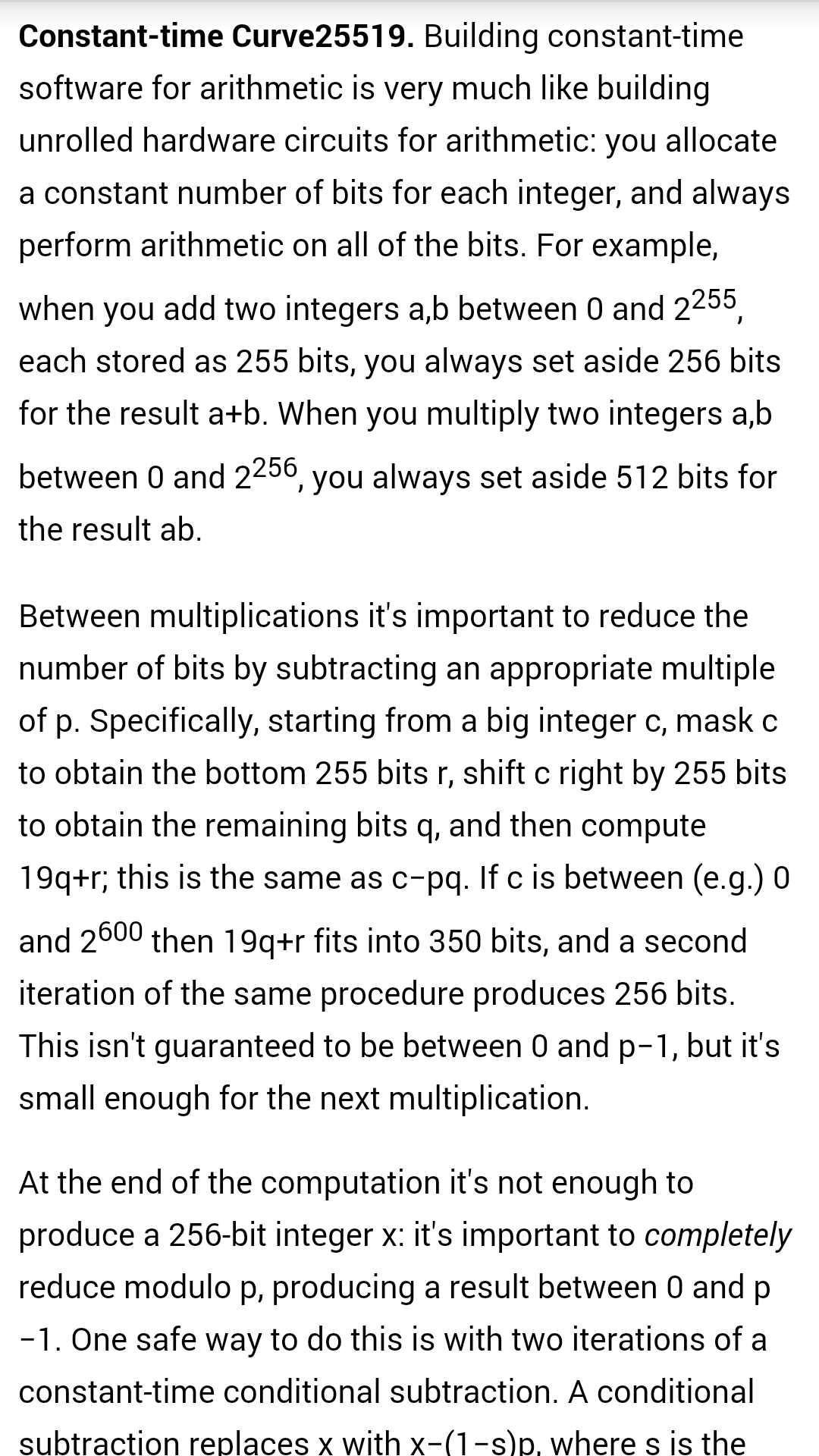 The following is taken from the wikipedia's page on cryptanalysis

And now some history about how the word Entropy was "coined" by Shannon. Taken from Tobin - Entropy, Information, Landauer’s limit and Moore’s law

It is possible to repeatedly fold a standard letter-sized sheet of paper at the midway point about six to seven times. In 2012, some MIT students were able to fold an 1.2 kilometer long toilet paper 13 times. And every time the paper was folded, the number of layers on top of each other doubled. Therefore, the MIT students ended up with 2^13 = 8192 layers of paper on top of each other. And poor Eve's job was to manually count all layers one by one.

There's a subreddit for crypto and it had an empty wiki.

So I filled it.

Below is a copy.

Please refer to this Wiki before asking questions that might have been asked before (use your common sense).

Cryptography is also usually more interesting than decrypting your random ciphertext, so consider that when posting, read what we are sharing first to see if it's really pertinent.

How to learn about Cryptography?

The first thing you should do, is to sign-up for Dan Boneh's course Crypto I on Coursera.

You do not have to finish it. Watching a few videos will already give you an idea of what is crypto and how easy/hard it is for you. If you can finish the course, and enjoy it at the same time, then you're in for a lot of fun.

Alright, that was interesting, MOAR

There are many ways to learn more about crypto. Here's a non-exhaustive list:

But my favorite way: read whitepapers. Look at the ePrint archives and check what papers interest you. Often papers will come with an introduction section that explains the basics.

What about studying cryptography in a real school?

First, it's important to cultivate your new passion. Don't let your course get in the way of reading or building and doing side projects involving crypto.

Second, You need either a bachelor in mathematics or computer science. Depending on which part you find the more interesting in crypto. Usually Math => Theorical Cryptography, CS => Applied Cryptography.

Now either you don't have a master, and you could choose to do a cryptography master. There are a few: Rennes, Bordeaux, Limoges in France.Stanford, etc...

Or you can do a Computer Science or Number Theory oriented master and pick a crypto subject for a phd. Note that a phd will often lead you into theorical research in university, although some phd can be done within a company and might involve applied crypto. But companies around the world might find that relatively relevant (in France a phd will get you to some places).

It's important to know what you want to do, theorical or applied or in the middle? Usually finding an internship in a applied crypto company helps to get out of academia for a while. A good way to see what please you the most. And good news, in cryptography internships are pretty easy to find (at least at the moment).

Alright I'm studying crypto now, how to get more involved?

Cryptography is a big world, many things are happening and it's sometimes hard to follow everything. Especially some mediums give you a high noise-to-quality ratio. So here they are:

Where to work in crypto?

Now is your time to find an internship or a job? Apply everywhere, in the world. But where? Where other cryptographers are working, or have worked. You can find that on their published papers (usually written in the header), on Twitter, on Linkedin, etc...

Finally, universities around the world usually have room for internships as long as you don't mind not being paid. 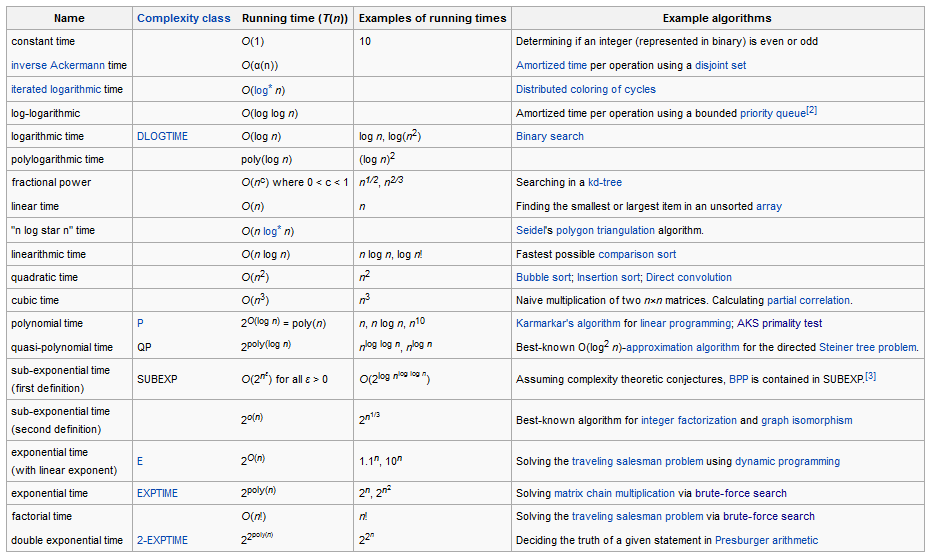