How does PLONK work? Part 5: From arithmetic circuits to constraint systems posted August 2021

In this fifth video, I explain how we can "compile" an arithmetic circuit into something PLONK can understand: a constraint system. Specifically, a PLONK-flavored constraint system, which is a series of equations that must if equal to zero correctly describe our program (or circuit).

How does PLONK work? Part 4: From programs to arithmetic circuits posted August 2021

In this fourth video, I explain the "arithmetization" of our program into so-called arithmetic circuits. You can see this as "encoding" programs into math, so that we can use cryptography on them.

How does PLONK work? Part 3: Starting with the end: polynomials posted August 2021

In this third video, I start by explaining what the protocol will use at the end: polynomials. It'll give you a glimpse as to what direction we'll be taking when we transform our program into something we can prove.

How does PLONK work? Part 2: An overview posted August 2021

In this second video, I give some intuition on how to think about zero-knowledge proof systems, with the example of proving the solution of a sudoku, then I give an overview of what I'll explain in this series of video.

I recently got into general-purpose zero-knowledge proof systems (cryptographic primitives that allow you to prove the execution of a program without revealing some of the inputs), specifically the state-of-the-art PLONK proof system. This is a series of video I made to explain what I understood and learned in the past few months. There might be some inaccuracies, so I apologize in advance for that. You can check all the videos via the playlist here: https://www.youtube.com/watch?v=RUZcam_jrz0&list=PLBJMt6zV1c7Gh9Utg-Vng2V6EYVidTFCC

In this first video, I simply explain what general-purpose zero-knowledge proofs are, specifically zk-SNARKs, and what PLONK is.

What is an inner product argument? Part 1 posted August 2021

The inner product argument is the following construction: given the commitments (for now let's say the hash) of two vectors $\vec{a}$ and $\vec{b}$ of size $n$ and with entries in some field $\mathbb{F}$, prove that their inner product $\langle \vec{a}, \vec{b} \rangle$ is equal to $z$.

There exist different variants of this inner product argument. In some versions, none of the values ($\vec{a}$, $\vec{b}$ and $z$) are given, only commitments. In some other version, which is interesting to us and that I will explain here, only $\vec{a}$ is unknown.

How is that useful?

How does that translate to the inner product argument though? First, let's see our polynomial $f$ as a vector of coefficients:

And here's our inner product again.

The idea behind Bootleproof-type of inner product argument

The inner product argument protocol I'm about to explain was invented by Bootle et al. It was later optimized in the Bulletproof paper (hence why we unofficially call the first paper bootleproof), and then some more in the Halo paper. It's the later optimization that I'll explain here.

Obliviously, we have to reveal $\vec{a}$ itself, which is not great. But we'll deal with that later, trust me. What we want to tackle first here is the proof size, which is the size of the vector $\vec{a}$. Can we do better?

So most of the proof size comes from the multiple reduction subproofs that you'll end up creating on the way. Our proof is really a collection of miniproofs or subproofs.

One last thing before we get started: Pedersen hashing and commitments

To understand the protocol, you need to understand commitments. I've used hashing so far, but hashing with a hash function like SHA-3 is not great as it has no convenient mathematical structure. We need algebraic commitments, which will allow us to prove things on the committed value without revealing the value committed. Usually what we want is some homomorphic property that will allow us to either add commitments together or/and multiply them together.

For now, let's see a simple non-hiding commitment: a Pedersen hash. To commit to a single value $x$ simply compute:

where the discrete logarithm of $G$ is unknown. To open the commitment, simply reveal the value $x$.

We can also perform multi-commitments with Pedersen hashing. For a vector of values $(x_1, \cdots, x_k)$, compute:

which will be handy in our inner product argument protocol

Here are the settings of our protocol. Known only to the prover, is the secret vector

The rest is known to both:

For the sake of simplicity, let's pretend that this is our problem, and we just want to halve the size of our secret vector $\vec{a}$ before revealing it. As such, we will only perform a single round of reduction. But you can also think of this step as being already the reduction of another problem twice as large.

We can picture the protocol as follows:

Does that make sense? Of course what's interesting to us is the proof, and how the prover uses that random $x$.

First, the prover cuts everything in half. Then they use $x$ to construct linear combinations of these cuts:

The verifier can compute $\vec{b'}$ as they have everything they need to do so.

So to compute this new commitment, the verifier needs:

So the new inner product should be:

Similarly to $A'$, the verifier can recompute $z'$ from the previous value $z$ and two scalar values $L_z$ and $R_z$ which the prover needs to provide.

So in the end, the proof has becomes:

We can update our previous diagram:

PLONK is the state of the art when it comes to general-purpose proof system. While it was released in 2019, the paper has recently received some updates, and the scheme is still evolving (with Aztec announcing an UltraPLONK version coming soon). This is the scheme that we use at Mina to compress the size of the blockchain from gigabytes to a fixed size of a dozen kilobytes.

While I don't think the core ideas are the hardest to understand, the scheme compresses a myriad of optimization which makes it hard to parse. In this post I hope to add some clarity to some aspects of the scheme. Note that I assume that you have some knowledge of how PLONK works.

How PLONK works, the short version

Eventually, the idea of PLONK is to prove that some polynomial $f(x)$ vanishes on some domain $H \subset \mathbb{F}$ (and I will ignore the permutation argument, which is just another proof). To prove that, we reduce the problem to some other problem. Incrementaly, it looks like this:

To prove the last statement, the prover uses of polynomial commitment scheme (specifically, the KZG scheme) to commit to the polynomial $f$ and $t$. The prover then sends the commitments to the verifier. At that point, the verifier has to check that for some random point $z$

This is done by sending a random point $z$ to the prover and doing an "opening" of the commitments at this point: the prover sends the values $f(z)$ and $t(z)$ as well as a proof that these are the correct evaluations.

This is in essence the PLONK protocol, except that this is not really what happens in the paper...

The newer PLONK actually does one more reduction of the last statement:

The last two steps is an optimization (called Maller's optimization) that removes the need for the prover to send $t(z)$, as the verifier can use the commitment to $t$ to produce a commitment to $r$ (to verify the opening proof).

To verify the opening of $r$ for $x = z$, the verifier will have to reconstruct a commitment to $r$ first. That's easy, it is:

If you've read PLONK, you've noticed that the prover actually doesn't send a commitment to $t$ directly, because $t$ is too large and polynomial commitment schemes have an upperbound fixed during the trusted setup. (By the way, $t$ is too large because the permutation argument makes it three times as large due to the three witness polynomials.) To circumvent that limitation, the polynomial $t$ is split into three smaller polynomials $t_{lo}, t_{mid}, t_{hi}$ such that:

This means that in our previous protocol, we can't prove directly that $z$ is a root of

This is not great, as the prover cannot produce a commitment to $r$ anymore. The reason is that $x^n$ and $x^{2n}$ cannot be committed as they're larger than the upperbound of our polynomial commitment. Instead, notice that since the verifier already knows these values, so they can pre-evaluate them at $z$ and ask instead for a proof that:

which is a fine request, as the verifier can produce the commitment of $r$ needed to verify the opening proof:

At this point, the protocol looks more like this:

Uh-oh, what about f?

The big proof in PLONK really boils down to two things:

Since the polynomial $f$ needs to be constructed such that:

the prover and the verifier perform a "polynomial dance" to construct the polynomial together. The end product sorts of looks like this:

And as in the previous section, the verifier needs to reconstruct a commitment to $r$ before being able to ask for an opening, which is now impossible as we're dealing with multiplication of commitments

but since the prover sends the evaluations of $a, b, c$ at $z$ (with proofs), the verifier can use that to simplify the polynomial $r$ to:

Finally, the verifier can produce the commitment of $r$ as:

There's much more to PLONK. I've skipped the circuit part, the permutation argument, I've also ignored the big pairing equation at the end. These will be subjects for another post :)

In the PLONK paper, they make use of an optimization from Mary Maller in order to reduce the proof size. This is a note explaining this optimization. If you have no idea what these words are, you might want to skip reading this post :)

Maller's optimization is used in the "polynomial dance" between the prover and the verifier to reduce the number of openings the prover send.

Recall that the polynomial dance is the process where the verifier and the prover form polynomials together so that:

In the dance, the prover can additionally perform some steps that will keep the same properties but with reduced communication.

A shorter proof exists. Essentially, if the verifier already has the opening h1(s), they can reduce the problem to showing that

Why couldn't the prover open the polynomial $L'$ directly?

The problem here is that you can't multiply the commitments together without using a pairing (if you're using a pairing-based polynomial commitment scheme), and you can only use that pairing once in the protocol.

If you're using an inner-product-based commitment, you can't even multiply commitments anyway. 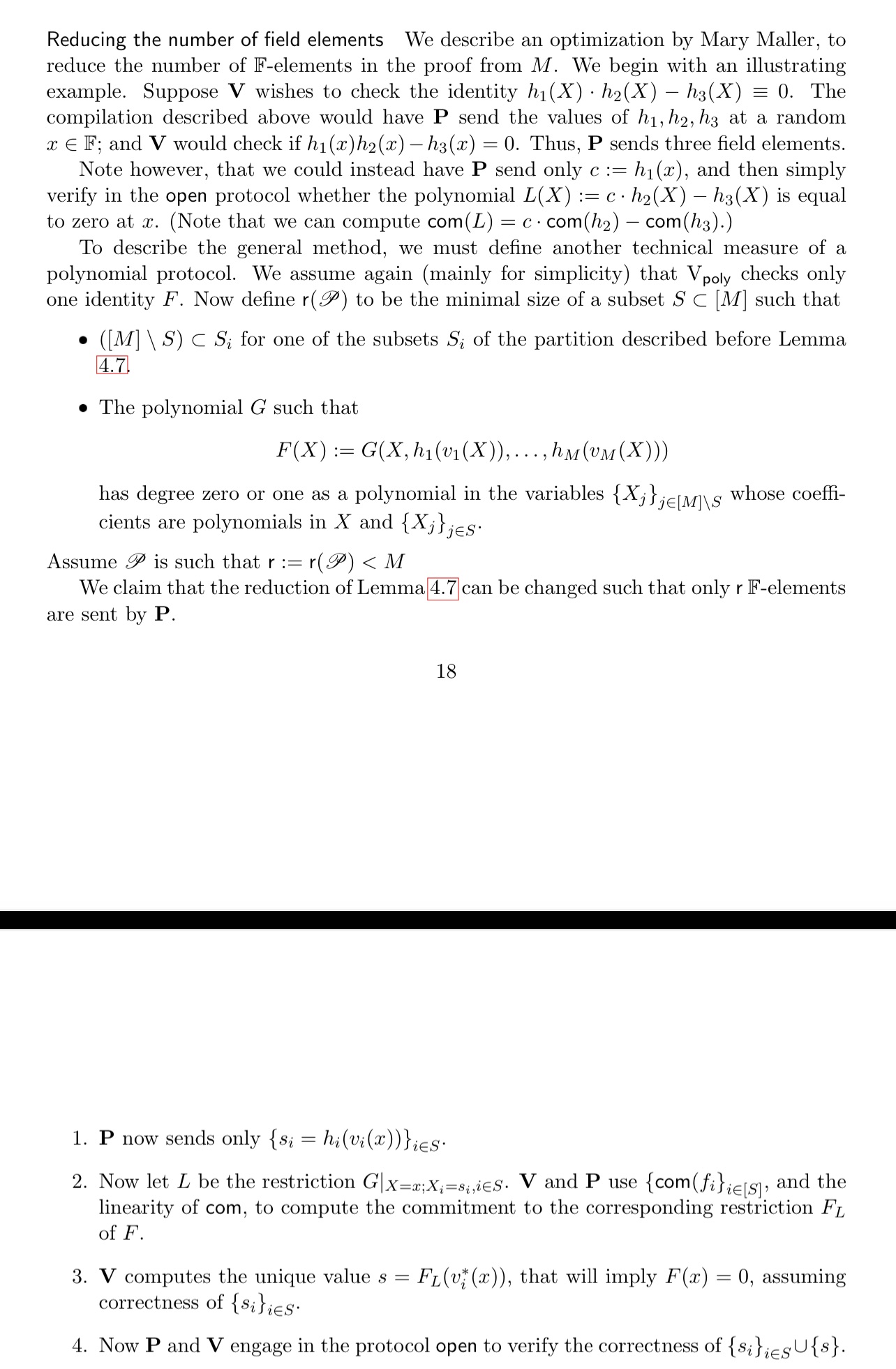 For completion, the lemma 4.7: